NASA Says Mars Mountain Will Read Like 'a Great Novel' 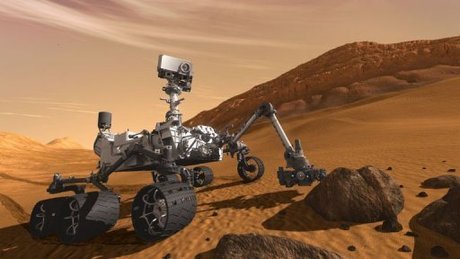 The U.S. space agency's unmanned Curiosity rover will explore a mountain on Mars that should read like "a great novel," revealing if signs of life ever existed on the red planet, NASA said Friday.

The landing site for the 2.5 billion dollar Mars Science Laboratory (MSL) was unveiled the day after the 30-year shuttle era ended with the return to Earth of Atlantis after its final mission to the International Space Station.

Clues sent home from Mars are important to NASA as it aims to build a spaceship capable of toting humans there by 2030, while private companies race to replace the shuttle with a capsule suitable for low-Earth orbit.

More than 150 scientists have spent years whittling down the landing site for Curiosity, the largest U.S. rover ever, set to launch later this year and land in August 2012.

From an initial set of 30 potential spots, they finally decided on the Gale crater, which contains a five kilometer (three mile) high mountain, over its leading rival the Eberswalde crater, which is home to a dried-up river delta.

"In the end we picked the one that felt best," said John Grotzinger, MSL project scientist at NASA's Jet Propulsion Laboratory.

"This could be the tallest mountain in the solar system that we could actually climb with a rover," he said.

The mountain, tucked inside the 154 kilometer (96 mile) wide crater, is shaped like a broad mound so the six-wheeled rover can climb at least halfway up.

When Curiosity arrives over Mars, the car-sized craft will be lowered onto a flat part of the crater by tethers suspended from a rocket-powered sky crane, while a camera on the rover's base snaps high resolution images of the terrain beneath.

The vehicle, which uses a radioisotope power source for heat and electricity, will carry 17 cameras and 10 science instruments, as well as a potent laser beam, drill and robotic arm.

Its main job is to hunt for rocks that look interesting.

When it spots one that appears worthy, it will zap it with a laser beam that can reach up to seven meters (23 feet), creating a spark of light that scientists can analyze for hints about the chemicals contained inside.

If NASA wants an even closer look, Curiosity can grab the rock with its robotic arm, drill a hole creating a powder, then dump that powder into one of two holes in the rover where instruments are waiting to analyze the dust.

The project is meant to last two years, but NASA hopes that like other some of its other rovers in the past, Curiosity will outlive its expected potential.

John Grant, a geologist at the Smithsonian Air and Space Museum, described the mountain as "this enormous stack... of layered material which represents the opportunity to literally read chapters in a book of the history of past deposition on Mars."

Minerals in clays and sulfates at the base of the mountain are of particular interest because they can reveal if any microbial life forms may have been able to survive, dating back hundreds of millions of years.

"We expect to find variations in those minerals which will tell us about the water, how concentrated it was, whether it evaporated, and the sources of the water," said Dawn Sumner, a geologist at University of California, Davis.

"And that will give us the history of some of the ancient environments on Mars, how those changed, and help us evaluate the habitability of the planet."

The area also contains signs that water once flowed down the mountain, cutting a canyon into the rocks.

"What we have learned from 150 years of exploration, is that if you start at the bottom of the pile of layers and you go to the top, it is like reading a novel," said Grotzinger, referring to the first expedition through the Grand Canyon in 1869.

"And we think Gale crater is going to be a great novel about the early environmental evolution of Mars that offers strong prospects potentially for the discovery of habitable environments."

The rover is not a "life-detection mission and we cannot look for fossils," he added. "But we can look for organic carbon that may be observed there," which would indicate some life once existed.

The announcement of Curiosity's exact destination came 35 years after the first spacecraft, the Viking 1, landed on Mars in July 1976.

NASA's solar-powered rovers, Spirit and Opportunity, landed in 2004 on what was to be a three-month mission.

Opportunity is still trucking along, but in May NASA finally gave up on Spirit, believed to have frozen to death during the harsh Martian winter.