Syrian Ambassador Lashes Out at Demands to Expel him 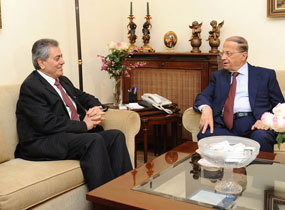 Syrian Ambassador Ali Abdul Karim Ali slammed on Saturday calls by some officials to shut his country's embassy in Lebanon, considering that Beirut has no interest in doing so.

“We are keen to maintain deep brotherly ties between the two countries, those who are demanding the shut of the Syrian embassy represent only themselves,” the ambassador told reporters after talks with Free Patriotic Movement leader MP Michel Aoun in Rabieh.

On Friday, al-Mustaqbal bloc MP Khaled al-Daher accused the Syrian regime of the twin bombing that rocked Tripoli in August.

“Those who are behind the bombings are revealed, it's the gang of (Syrian President) Bashar Assad in Lebanon,” Daher added.

He pleaded for justice, urging President Michel Suleiman and the government to expel the Syrian ambassador and cutting ties with the neighboring country.

Forty-five people were killed and over 800 wounded in the twin bombings that targeted two mosques in Tripoli.

Asked about the conditions of the Syrian refugees in Lebanon, Ali reiterated that his country “previously warned of the impact of the situation on Lebanon and the region.

According to the United Nations High Commissioner for Refugees, more than 842,000 Syrians have fled to Lebanon since Syria's conflict broke out in March 2011.

Lebanon is hosting the highest number of Syrian refugees in the region, followed by Turkey and Jordan.

While both Turkey and Jordan have opened official refugee camps at the borders with Syria, Lebanon's government has refused to do so.

Thousands of refugees now live in apartments -- either as relatives' guests or as renters.

But thousands of others, who cannot afford the cost of living in Lebanon's cities, shelter in hundreds of informal tent settlements scattered across the country.

Ali pointed out that the Syrian government insists that it could find a way out of the crisis if the rest of the people cooperate with it.

“If there was any cooperation we would've averted the situation,” the diplomat said, noting that Syria is still reaching its arm for any solution.

Ali added that gunmen in Syria are preventing people from returning to their country, calling on neighboring countries to act responsibly.

“The crises are complicated and dangerous and there's a clear intervention by Israel,” he said.

is there a decent Lebanese which wants to defend this guy?

i dont care about this guy, but m14 mentality is puzzling. for years and years they screamed and whined and complained that syria didnt have an embassy in lebanon. now that their request was answered the scream and whine and complain that they want the opposite. what a waste of time they are, turning in circles and achieving absolutely nothing.
they either dont know what they are doing/what they want, or they are deliberately stalling.

Mowaten I think it's a little different to what you are saying. I think Lebanon definitely needs to have a Syrian embassy is Lebanon to respect the sovereignty of the country and no one can deny that fact. I think the problem here is the fact that if the Syrian regime has been implicated in the tripoli bombings than yes the Syrian ambassador must be expelled.

the embassy has been implicated? how, when and according to who? you're just talking out of pure fantasy here.

M14 was calling for a Syrian embassy in Lebanon in order to establish a distinction between the Syrian and the Lebanese governments, since before the Syrian embassy used to be in La7oud's office. Now, when the embassy is functioning as a foreign occupation base from where crimes against Lebanon are ordered, of course no decent Lebanese person wants it there. What a waste of space you are. Get a brain.

@ Mowaten I said if the Syrian embassy was implicated not that it had been. @ southern I agree with what you're saying. Any foreign country that does harm or that meddles in Lebanon's affairs should have their ambassadors spoken to and subsequently expelled if they are implicated but the problem there being is that Lebanon would have no embassies or ambassadors left.

sagh, I am surprised that you as an Alawi celebrate Christmas.... Good for you!!! BTW, it is Santa Claus not Santa Clause. I am sure you already knew that:) Merry Christmas Abbas!

C'mon..... dialogue is better than none. Even if we hate Syrian government policy, we must engage Syria for the better. I don't think it is in our interest to have the Islamic Republis of Syria established, either. Talk with all, ehlp them find their way. It is time for the region to stop shooting and start talk. We are all going to hell in a hand basket.

lmao, iceman!!!!! He's been posting for weeks now about santa "clause". A real Christian he is, yes)))

skeleton is dying to meet you....

exactly :)
he showed he was afraid!
I read another article which shows that hizbushaitan is now facing al Qaeda in Lebanon (which is true) and the shia community will be paying a high price from now on like in Iraq.
I am amazed at the shia community that is still cheering for this guy who has brought death and desolation to their doorstep.

Expel the collaborators with foreign occupation forces now! Yalla ya Karim, natrinak back home in Damascus.

i se you're a true m14, talking like a lowlife. fyi you cant "force" a country to open an embassy in another country.

Southern, go back to school and get an education… do yo want to spend the rest of your life as an illiterate, posting Assad propaganda for a couple of rials.

Nitwit, you are an embarrassment "impartial, it's nothing to do with propaganda but a fair treatment"… in what sense of the word are you impartial????

You are one of the M8 rah-rah boys that 100% cheers for the Assad-Iranian Axis and their terrorist militia. In the last few years Hizbullah has openly declared their allegiance and it is not to Lebanon.

We are keen to maintain deep brotherly ties between the two countries, those who are demanding the shut of the Syrian embassy represent only themselves,” the ambassador said.

well da! Obviously, they don't represent Syria and those who do (M8) would never go against their president Bachar.