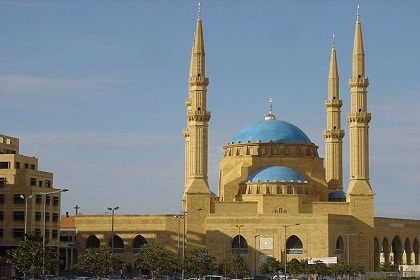 President Michel Suleiman and caretaker Premier Najib Miqati were at the helm of top officials who condoled the family and the leader of al-Mustaqbal parliamentary bloc former PM Fouad Saniora.

Miqati announced Sunday a day of mourning, saying TV and radio stations would broadcast at noon one hour of programs that are suitable with the “painful incident.”

He urged the Lebanese to stand a moment of silence for five minutes at 12:00 pm “to condemn the heinous crime” and express a “comprehensive rejection of terrorism.”

Iranian Ambassador to Lebanon Ghazanfar Rokn Abadi offered his condolences to the family of Shatah, considering that “the crime only serves Israel that is working on inciting sedition in Lebanon and the region.”

“We deeply need dialogue and to focus on the common points,” the ambassador said.

The 62-year-old Shatah, who was also a former ambassador to the U.S. and an adviser to al-Mustaqbal movement chief ex-Premier Saad Hariri, was killed along with his driver and five others in a car bombing in downtown Beirut on Friday.

The Honda CRV that blew up was rigged with up to 60 kilograms of explosives, and parked along Shatah's route in the posh neighborhood. The blast struck the former minister's four-wheeler as he was driving to a meeting at Hariri's downtown residence known as Center House.

Shatah had stated in his will that he wished to be buried beside his mother in the family's cemetery in the northern city of Tripoli.

However, the March 14 alliance got the family's approval to bury him Sunday near the graveyard of former Prime Minister Rafik Hariri in Beirut Central District.

do not worry about saad Hariri returning or not.
worry about what is going to happen to you and your masters after this murder.

Rest in peace Al Chatah, and I truly hope that justice will be done.

Yes france is the pefect land for terrorist in fact khomayni was there before going back to iran killing all the leftist so there is some logic in ur say...
And of course ksa killed hariri, kassir, hawi... And now chateh and all anti surian regime politicians.... Here again: plus one southern, bravo

Yes guess what the world all changed since the 80's no more soviet union but a country ruled by an oligarchic putin who is spreadding terror, america is not the capitalistic hub as china entered the free market, iran is now an islamic state ruled by a ruler of the revolution that is spreading turbaned man soldiers all around the world (so long with a democratic iranian revolution dream then..)...
Yes in deed the world changes my friend... Bud don't be sad u get ur plus one to...

Saghh great reply, u did all this by urself?... Bravo man, plus one :)
Well guess what we thank you for the same song we have been hearing for 8 years and 13 assassinations but please can you try something new?...

May his memory be eternal. Also, let's stop blaming Israel every time an M14 person is assassinated. All of the years Syria was in Lebanon, and all of the those were assassinated during their occupation and soon after, were all alleged victims of Israel. Israel did not care about Chatah, but this is a message to the anti-Syrian Regime/M14 leadership of their potential fate.

Zahle1, I am responding to your post to say a sincere "Thank you" for a post though brief, but far reaching, I could not add anything to your words brother.

@Sagh : the only conclusion is that you're an idiot.

A stronger than ever Hezbollah who effectively grabbed control of most state institutions. Has granted itself the freedom to do as it wishes with no regards for what the rest of us Lebanese think. Who are breaking the law without anyone being able to hold them accountable.

Hezbollah wants to rule Lebanon and they will do it by force and cheat their way to power if they have to.

They will be eliminated should we need a civil war to do so !

Lebanon lost one of his best sons, educated, internationally experienced, open-minded and non sectarian even if some lowlifes here try to portray him as non moderate. I was watching yesterday debates/interviews with him, the guy knew how to argue, how to communicate. That's why they killed him. A brilliant man opposing the syro-iranian hegemony on Lebanon...

sagh
you are out of your mind
what kind of drugs are you taking?