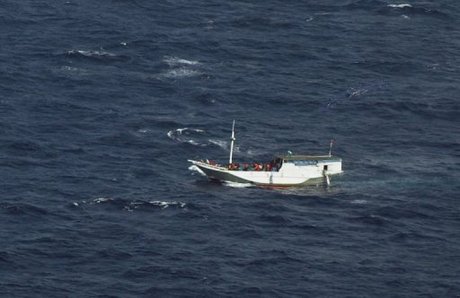 Bahraini authorities said Monday they have seized a boat smuggling explosives made in Iran and Syria into the Sunni-ruled kingdom, which quashed a Shiite-led uprising in 2011.

The boat, which had two Bahrainis aboard, was stopped over the weekend at two nautical miles (3.7 kilometers) off the archipelago's coast, public security chief Major-General Tareq al-Hasan said.

He said it had been tracked over a distance of 118 nautical miles (218 kilometers) northeast of the kingdom.

"Fifty hand grenades made in Iran," as well as "295 fuses connected to switches labeled as made in Syria," were found in the 29-foot (nine-meter) vessel, he said in a statement carried by state news agency BNA.

Dozens of C4 and TNT explosive devices were also found on the boat, he said, without providing details about the source of the alleged shipment.

Bahrain crushed an Arab Spring-inspired uprising led by members of its Shiite majority in 2011, with Saudi-led Gulf troops aiding in the crackdown.

Since then demonstrations have regularly been held in Shiite villages ringing the capital, often setting off clashes with security forces.

At least 89 people have been killed in Bahrain since the protests began, according to the International Federation for Human Rights.

Several bomb attacks have also taken place in recent months, including one that targeted a Sunni mosque close to the royal court in July but caused no casualties.

The head of the main Shiite bloc al-Wefaq was released after a day of questioning, but was charged with incitement to religious hatred and spreading false news endangering national security.

is there something other than terroris that comes out of the extremist sectarian regimes of iran and Syria?

we are experiencing daily their terrorist acts.

I doubt the authenticity of the story. Iranian intelligence would likely be the organizer of such venture. Why would they keep the made in syria label on the fuses? They are too professional for suich rookie operation. The professional assasination in Lebanon is more in line with their abilities.

Hmmm...interesting, waiting for the pics/videos.
Are those Wefaq thugs still trained in Bekaa ?

No spiteful comments there.

iran is a country, takfiris are a buch of sickos, nothing to compare...

It may be counted but I am willing to bet that they will outlive the clerical regime in Iran and the criminal regime in Syria.