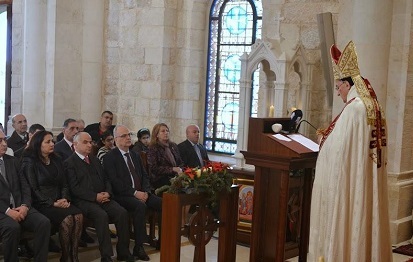 Maronite Patriarch Beshara al-Rahi hailed on Wednesday Saudi Arabia's financial donation to the Lebanese army, hoping that it would pave the way to Lebanese political initiatives among the rival parties.

He said during new year mass: “We hope the donation will help lead to an understanding between the rival powers and to the formation of a new government.”

He congratulated the Lebanese state and army on the Saudi grant and President Michel Suleiman for keeping the state in high regard.

“We hope the initiative will help the political rivals make sacrifices and protect Lebanon in light of the impending presidential elections,” al-Rahi remarked.

Moreover, he praised President Michel Suleiman for his stances that are keen on safeguarding Lebanon.

“You took an oath of loyalty to the nation and constitution,” he added, while hoping that he will prevent the postponement of the presidential elections.

Suleiman's six-year term ends in May.

There are growing fears over the possibility of the postponement of the presidential elections given the sharp divisions among the political powers.

Suleiman announced on Sunday that Saudi Arabia has decided to donate three billion dollars with the aim of purchasing French weapons for the Lebanese army as soon as possible.

What else could Patriarch Beshara al-Rahi say? Al-Rahi is following in Jumblatt's footsteps in trying not to offend anyone especially the Saudis who would no doubt exact a steep price for any perceived offense to their meddling in Lebanon.

We see the price that "moderates" or secular Muslims pay for any apostate views they have. Apostate views meaning views contradicting KSA policy. That policy is now "You are either with us or against us." This is the policy that Bandar forged with Bush to quash all criticism.

When $3 billion is granted there are always conditions. Even Naharnet mentioned that the first anti aircraft fire against Syrian aircraft was shortly after this offer.

For you to insinuate that there were no preconditions is either disingenuous or naive. We shall see just how Suleiman behaves over these next days and weeks ...

That is because you march in lockstep with the KSA Wahabbi ... Not many Sunnis left that would dare to contradict anything that the KSA said ... The purge of moderate and secular Sunnis is well underway.

FT the fact that the 3 billion doesn't pass through the lebanese government is not even close to being a bad thing. less for them to pillage. i know that this is bad news for you since im sure 3amo bassil would have thrown in a new years bonus for you to keep spewing garbage on this website.

The era of Suleiman's rule is over. We need a real Lebanese leader as President, not a Saudi-Wahabi puppet like Suleiman.

bad news for you Suleiman is staying or being replaced with someone exactly like him. 3aw-3aw-3awn will never see the chair again in his life.

FT: I am always curious how roomers or conspiracy theories start. Should we now factor in the possibility of France sending antiquated and worthless weaponry to Lebanon in determining the various probable outcomes that could change "by the hawa" to fight the proxy army of the revolutionary guard of the Islamic Republic of Iran, not mentioning Syria supported by Russia? But wait, before you even think it, no I am not in favor of receiving such a generous gift from any country whose identity and focal point is religious in nature such as Islamic Republic of Iran, KSA, etc. or of any religion. People, get it through your thick heads. You are being played, and the country is slipping away from under your feet.

FT, I don't expect any weapon producing nation to share its latest technology with a nation who is no more than a friendly country. The U.S. may share such with Israel (and I am not so sure since I don't have personal knowledge) but I don't think the U.S. will do so "welly nelly". We should also be extremely distraught if indeed KSA circumvented the Lebanese government and made the deal directly with France. I truly don't know, but did Iran ask the Lebanese government, got permission/authorization, during whatever state she was in, when they not only gave weapons to H.A. but also built an army outside the State? These foreign interests can do exactly "this" and more to Lebanon, but not the Lebanese people in general. Why? All you have to do is look at our paid politicians. More like shortsighted, oppressive billionaires who allotted membership in government portfolios and parliament.

FT: Of course there are conditions embedded with this 3 billion dollar gift. I prediction comes from my assessment that the so called moderate (in the context of Islam) M14 members who care about their pockets are not there to fight and challenge another foreign extremist movement that has infested the country. I am talking about the Islamic Republic of Iran. In this state of hell that Lebanon has been in, moderates by themselves can not survive unless we align ourselves with a super power that prays for the money like Israel has, and is prospering very nicely from our weaknesses and expense. I am not necessarily mean the U.S. So, nature takes its course, and the other side automatically toughens up with extremist agenda. My view.

Flametroglodyte - HA is still being armed by Iran today.

so a foreign country is arming a group to become more powerful than the army - a group that is not under the control of elected officials. of course to a contrarian democracy-hating intellectually bankrupt senile fool like you this is not a bad thing.

FT: But those other factions gave up their arms, and H.A. is still being replenished by Iran.

good... if the army strenghtens then the iranian militia won't have any more excuses to keep their arms...

but they will not hesitate to shoot at the army if one day the army wants to disarm them...
hezbis are getting more and more isolated....