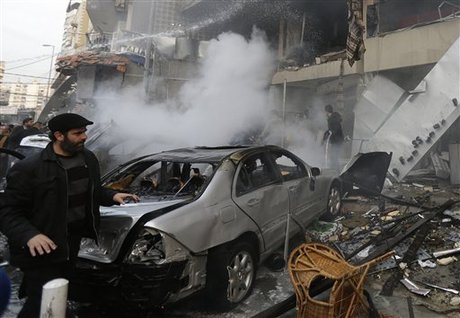 A leader in the Salafist Jihadist movement in Jordan announced on Thursday that the al-Qaida-affiliated Al-Nusra Front in Syria and the Islamic State of Iraq and the Levant have officially decided to militarily enter Lebanon.

"They want to be militarily present in the country until Hizbullah withdraws its fighters from Syrian territories and frees all detainees it is holding as captives,” he explained.

The leader did not, however, provide any additional information in his message to the UPI.

The Salafist Jihadist Movement in Jordan is allied with both ISIS and Al-Nusra Front in Syria.

Great. now both of ya go find an empty field somewhere, gather your troops and go battle like men. keep us posted.

Perfect, let them all kill each till kingdom come. We want peace and be left alone in Lebanon

what we warned about years ago is now unfolding, it was predictable because they announced it before -way before- HA ever entered syria. they were in iraq, in syria, and to complete their plans in the levant (the L stands for "levant" in case you hadent noticed) they needed to come to lebanon. HA's intervention in quseyr was defensive and curbed their ambitions. they want to take it as pretext? go ahead, for all we care. war is war, no need to make up excuses.

If we don't do anything to stop them, we will have a Sunni Hezbollah on our lands... history will repeat itself !

if you meant a sunni hezbollah that is really like the actual hezbollah, in values, discipline and peacefulness towards others sects, i would welcome it a hundred times.
but what those takfiris represent has nothing to do with that. they have no project other than blindly spilling rivers of blood.

"what we warned about years ago is now unfolding"

just like we warned you that till hezbollah does not respect lebanese laws and are not controlled by the gvt , counter reactions were inevitable, it is mathematical...
but of course you ignored it and laughed at us... LOL

i did not say there would not be "reactions" i said hezbollah is part and parcel of lebanon and nobody can ask it to dissolve, surrender or disappear. no matter how hard your wishful thinking is.

if it were evil like takfiris i'd support fighting it, but the way i see it it is the only guarantee against israel, no matter how much i respect and love our army, we all know the government can be frozen for months and unable to take a decision (look at the oil file, the situation in tripoli, arsal, the borders... how easily our gov and army can be paralyzed)

This will be a bloody year.

Al Nusra/Qaeda etc. are now storming Lebanon, because they know they are about to loose in Syria. I knew this would happen, and the resistance is prepared.

Hope that HA and LAF are really prepared.
I believe Al Nusra is storming Lebanon to prevent HA to go fight in Syria. So I agree with people stating that HA brought this to Lebanon.
However, at this point, it doesnt matter who is to blame, what matters is what we r gonna do.
When it comes to HA vs Nusra, I m with HA 100% and I wish all lebanese stick together against those terrorists. they r harmful to all lebanese from all denominations. Now they r targeting HA, tomorrow they will target Future or LF ...
We as lebanese, have never had a common ennemy. Maybe by being united against a common ennemy we could start to become a nation.

Sorry guys. as much as I hate al nusra/Qaeda, as well as Israel, I will not fight them because hizbushaitan dragged me to do it.

like in 2006, where hizbushaitan dragged us Lebanese into a war with Israel which destroyed our country, they are now dragging us into a war with these other terrorists.

my point is the following: let them fight it between each other, and we will defend ourselves against both terrorist groups: hizbushaitan and the others.

they want to kill each other, they are my guests.

simply put: if Lebanon is attacked I will definitely fight.

but I will never accept to be dragged into any war by the Iranian terrorist extremist militia.

geha: sorry to break it to you, but it's not like we were really counting on you.

Men you are all cowards HA and QA. Leave Lebanon alone and go kill each other outside it.

We prefer to get posted via twitter. We need not see you back - please.

Thank u hezbollah 4 importing terrorists 2 lebanon. As if we didn't have enough already w/ ur terrorist organisacion.

lol eh, those fighting them "imported" them, while those welcoming them have no responsibility whatsoever. and death to logic!

Isis was created by the giraff. He's the one controlling them and today was just a play, an attempt 2 victimize the filthy terrorist organization and its crooked community supporting it.

yea, takfiris were created by alawite assad to kill shias and alawites. genius!

no, giraffes are not reptiles but ruminants, however Berri is a reptile...

If they are in Jordan, why not attack Jordan, isn't Jordan at peace with Israel. Why the need to come to Lebanon or is Israel no longer the enemy of muslims?

Salafis do not recognize the legitimacy of any of the arab or muslim regimes including that of Saudi Arabia's. As leaders are deemed as apostates, all of these regimes are considered potential targets. Look at the Taliban in Afghanistan/Pakistan, for example.

sword that still doesn't explain why the need to come to Lebanon if they are already in Jordan. Why not open a front in Jordan. When you say that they don't recognize the legitimacy of Saudi rule, are you sure about that. where do you think they get their funds to purchase weapons.

U are more than probably a shia thinking that calling urself SOZ would make people think u're sunni.

There are some wealthy saudi individuals who support islamists, however, the government officially supports classical dictatorships like the Egyptian military against the MB. And the Saudi Government along with the US/UK supports the secular factions of the FSA, not the jihadists.

Hezbollah's proxy control of Lebanon and its war in Syria is fueling the issue. Assad is being sustained by iranian-backed shia militias from iraq and lebanon. If Syria falls, the game is over for Iran, and they realize it too, all they need to do is lose once. Jordan, on the other hand, is neutral. Many of the islamists, especially in iraq, are actually disaffected formerly moderate sunnis, who are angry over what happened to saddam, and the growing, tyrannical influence of the shia islamists and iran, which is fueling extremist sunni sentiments.

Salafists, jihadists, and takfiri's all refer to different phenomena, all should be approached in a different way if you actually want to set up a means to counter terrorism. The conflating of all these different terms is simply a way for Ba'ath, the coup leaders in Egypt, etc. to mislabel their opponents and justify a clamping down on conservative-democratic movements ala MB and FSA.

Southern, Indeed Arsal should be controlled and even sealed. Unfortunately the army is poorly equipped and stretched with the different missions that it has to do from the south till the north.
I wish Hizbollah would withdraw from Syria and put its formidable means both in men and weapons under the control of the Lebanese army to control the borders and not allow any extremists to enter or leave lebanon.

Great hezbollah, now your cousins are coming IN

Saudi supports FSA???
How much is the Saudi paying you?? Thanks to Saudi's and there Al-Qeada there is no more FSA.

What is your obsession with talking about people's religions??
Didnt your parents teach you basic manners? Or were you raised by wild hogs in some sub-Saharan landscape ??

all those islamist jihadies know what to do is fight.
brain washed idiots and loosers they are.
go educate yourselfs and try to invent something constructive to society;
and contribute something positive.
there is nobody waiting for you in heaven.....HAHAHAHA

thank you hezbollah! :) rename beirut to baghdad and it's officially done. the filthy farsi terrorist scum iranian filth disgusting ayatollah-following dogs have managed to completely destroy the greatest arab country in a matter of 3 years. BRAVO! Bravo ya 7ameer, ya watyeen, ya filth ya hezbollah.

This is not hell, this is Lebanon. My country.
Hell fire awaits those suicide bombers, their supporters and financiers in Syria, Lebanon, Iraq and elsewhere.

Unrelated: Your avatar name is "dogkiller" and you avatar pic is a dog?? does this mean you will take your own life?? I urge you not to take this path in life. There is more out there for you. Do not be discouraged by the depression and agony Al-Qeada/Saudi bring to this world. Rejoice and live.

@proudm14 -Thank your Saudi Arabian hero Saad Hariri for the destruction yet to come. Actually Hariri is just a spineless puppet, everything he does or says is dictated by Saudi Arabia. Who do you think funds these groups. Wait, don't tell me, It's Bashar...

They are already in Lebanon sneaking around in allies & crawling in bushes dressed up like women looking for People to murder.

Another 2006 on Lebanon, this time we do not kidnap Israelis to invite the F16s, but rather enter the Syrian war to cause innocent Hajj people to be kidnapped and bring in car bombs as retaliation.

Lebanon will finally revisit the way era and its economy will be ripped into pieces because of the stupid mistakes of HA that all the Lebanese people are paying unwillingly. I also think that HA will start feeling the pressure because until recently it thought that no one could target it while they were targeting the others and killing prominent people of Lebanon to stop them from expressing their views which were mainly in the best interest of Lebanon. I presume that the downfall of HA is soon. Amazingly, though, it would have been self inflicted due to their stupid demeanor.

Seems they received your invitation Hassan Kezballah. Thank you for once again bringing war to Lebanon ! I hope you're happy.

I would suggest you move out all your troops to Syria and take the war there instead... With your crew, we already have enough terrorists in town !