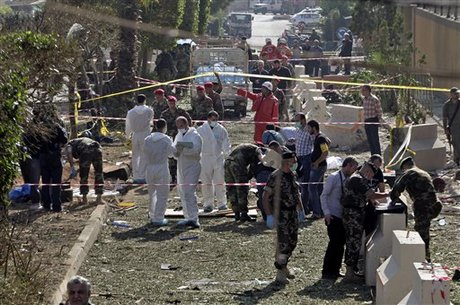 Saudi Arabia rejected a request by the Islamic Republic of Tehran to participate in the investigation with the “emir” of the Abdullah Azzam Brigades, Saudi national Majed al-Majed, who is allegedly detained by the army intelligence.

According to al-Joumhouria newspaper published on Friday, the issue is set to inflict further deterioration in the Saudi-Iranian ties.

Caretaker Foreign Minister Adnan Mansour confirmed on Thursday an Iranian request to “participate in investigations with al-Majed given that the explosion took place on an Iranian soil.”

Media reports had said that al-Majed, who is wanted by Saudi authorities, is the suspected chief of the Abdullah Azzam Brigades, which claimed it carried out a deadly November 19 double suicide bombing at Iran's Beirut embassy that killed 25 people.

For his part, Saudi Ambassador to Lebanon Ali Awadh Asiri said in comments published in As Safir that “the matter (of including Iran in the investigations) concerns only the Lebanese authorities as Saudi Arabia doesn't have any information on when al-Majed entered Lebanon.”

Officials said the suspect's DNA was being tested to remove any doubt over his identity.

Tension between Saudi Arabia and Iran has affected the situation in the region with the ongoing conflict in Syria a main point of contention.

The Abdullah Azzam Brigades group was designated in the United States in 2012 as a "terrorist organization."

The group was formed in 2009 and is believed to have branches in both the Arabian Peninsula and Lebanon.

The Lebanese unit is named after Ziad al-Jarrah, a Lebanese who took part in the September 11, 2001 attacks on the United States.

It has sporadically fired rockets into northern Israel, and the Brigades also claimed responsibility for the 2010 bombing attack of a Japanese oil tanker in the Strait of Hormuz.

It is named for the Palestinian mentor of the late al-Qaida chief Osama bin Laden. He was killed in a 1989 bomb blast.

According to Islamist sites, al-Majed was revealed to be the leader of the Brigades in 2012.

On Wednesday, a Twitter account belonging to Sirajeddin Zreikat, a member of the Brigades, appeared to have been suspended.

Zreikat had claimed responsibility in the group's name for the Iranian embassy bombing.

That attack came amid rising tension in Lebanon over the role of the Iran-backed Hizbullah in the war in neighboring Syria.

Hizbullah and Iran are allied with the Syrian regime, and it has dispatched fighters to battle the uprising alongside government forces.

In 2009, Lebanon sentenced al-Majed in absentia to life in prison for belonging to a different extremist group, the al-Qaida-inspired Fatah al-Islam.

WOW.... Iranian soil huh... ! Does "your" Embassy Protocol Mr. know all allow for your hizb of terror to stop and search Saudi embassy cars.

Saudi Ambassador to Lebanon Ali Awadh Asiri said in comments published in As Safir that “the matter (of including Iran in the investigations) concerns only the Lebanese authorities as Saudi Arabia doesn't have any information on when al-Majed entered Lebanon.”

a bit contradicting the title...

@Casper
I already understand why Saudi doesnt want to allow Iran to question him. Its simple, it wil easily expose the Saudi hand in the carnage.

What I dont understand what YOU have against Iran wanting to question this Al-Qeada scum who is responsible for the death of dozens of Lebanese.
Your in the business of protecting Al-Qeada?

Do you sell fresh brains on Fridays?

did u just read the article ?

“the matter (of including Iran in the investigations) concerns only the Lebanese authorities as Saudi Arabia doesn't have any information on when al-Majed entered Lebanon.”

Saints do not give interviews.

whoever , wants to question this terrorist should be allowed to do so.
terrorists have no nation, no humanity,... nothing.
they should have no rights.

as well hizbushaitan elements fall under that category being terrorists.

The explosion did not take place on Iranian soil. It took place on Lebanese soil in front of the Iranian EMbassy.

But off course, Iran considers Lebanon to be Iranian soil now ...

None should be allowed to participate in the investigation. They should both be kicked out of the country and their ambassadors arrested for committing and facilitating warcrimes.