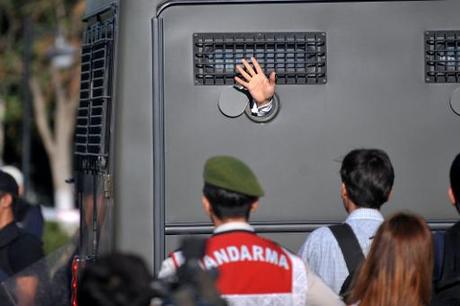 The remarks by Bulent Arinc came a day after it was revealed that Turkey's military had demanded a retrial for convicted officers, accusing the police and the judiciary of fabricating evidence in two separate cases.

"Nobody should have expectations for a general amnesty," Arinc told reporters. "We have no such plans".

He said however that the right to fair trial should not be violated.

In 2012 and in 2013, hundreds of military officers including former army chief General Ilker Basbug were convicted and given long jail terms for plotting to overthrow the government.

The military, which considers itself the guardian of the republic's secular principles, has waged three coups since 1960 and forced out an Islamist government in 1997.

But Erdogan has clipped the wings of the once-powerful military with a number of court cases since it came to power in 2002.

The army's latest move comes amid a political crisis sparked by a high-level corruption investigation that has exposed a power struggle between Erdogan and loyalists of influential US-based cleric Fethullah Gulen who wield influence in the police and the judiciary.

Erdogan's top political adviser Yalcin Akdogan suggested last month that those who took action against the army were also those orchestrating the corruption investigation against key government allies.