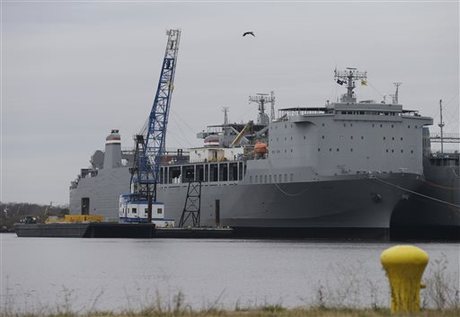 Danish and Norwegian vessels left the Cypriot port of Limassol Friday and headed towards Syria to escort a delayed shipment of chemical weapons for destruction, a spokesman said.

"The four ships have now set a course toward a holding area in international water outside Syria, so we are most ready to enter the port of Latakia when the order arrives," he added.

The ships are to be joined by Chinese and Russian vessels inside Syrian waters under a plan agreed in Moscow on Friday.

The removal had been scheduled to take place before December 31, but the deadline passed and a new one has not yet been set.

The year-end deadline for the removal of key weapons components was the first major milestone under a U.N. Security Council-backed deal arranged by Russia and the United States that aims to eliminate all of Syria's chemical arms by the middle of this year.

Syria's worsening civil war, logistical problems and bad weather had held up the operation to move chemical agents to the port of Latakia, said the joint U.N.-Organisation for the Prohibition of Chemical Weapons mission overseeing the operation.

Under the plan, the chemicals will be taken from Latakia to a port in Italy where they will be transferred to a U.S. Navy vessel fitted with equipment to destroy them at sea.