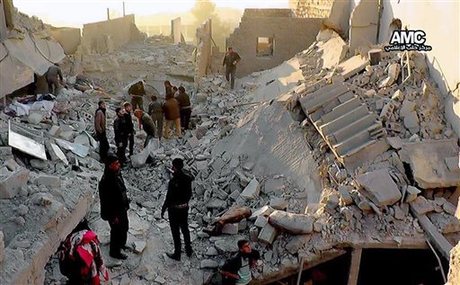 "Regime forces have taken over the area of Naqarin and are advancing towards the industrial area of Aleppo city," said the Aleppo Media Center, a network of activists on the ground.

"This advance is clearly a result of the rebels being busy fighting Islamic State of Iraq and the Levant," activist Nazeer al-Khatib told Agence France Presse in a Skype call.

On Saturday, ISIL militants fought pitched battles with other rebels in the northwestern town of Saraqeb and seized the frontier town of Tal Abyad on the border with Turkey after Islamist rebels pulled out, a monitoring group said.

The Britain-based Syrian Observatory for Human Rights said Islamist rebels launched an offensive to push ISIL out of Saraqeb, the jihadists' last bastion in the western province of Idlib.

They "took over most of the town, and besieged hundreds of ISIL fighters," said Observatory director Rami Abdel Rahman.

During the day a car bomb exploded in Saraqeb near an Islamist rebel checkpoint, killing two Islamist commanders, the Observatory said.

ISIL militants also battled rebels in the northern city of Raqa, where they captured a train station and a checkpoint run by other rebels, said the Observatory.

The corpses of dozens of ISIL fighters were found in a Raqa hospital, the monitoring group said.

Meanwhile, muezzins in Jazra, a town west of Raqa, urged residents to identify the bodies of dozens of Islamist fighters who had been abandoned on the battlefield, added the Observatory.

Although rebels initially welcomed jihadists in Syria, ISIL's horrific abuses and its quest for hegemony over opposition areas sparked a massive backlash against them.

ISIL had previously warned rebels that if they continue to fight them, they would withdraw from the frontlines in Aleppo, Syria's second city, thus allowing Assad's forces to deploy.

The Observatory also reported that "an ill-reputed rebel group raided an ISIL commander's home in Aleppo city... and kidnapped his mother and his sister, and raped his mother."

Fighting also raged on between government forces and rebels in other parts of Syria, and an regime air raid killed at least six people in central Hama province, said the Observatory.

And 12 people were killed in regime shelling of a neighborhood in the central city of Homs, the NGO said.

More than 130,000 people have been killed in Syria and millions more displaced since the conflict erupted in March 2011.

Rest in Peace. One day, Syria will be free of the evils of Assad and ISIL.

Well if for one thing, this battle has proven one time tested principle, that a man fights a lot better in his land against the foreigner. The FSA are after all Syrians, the Takfiris are after all Foreigners.