Israel: UNIFIL Bombing a Message to Scale Back Operations Against Hizbullah 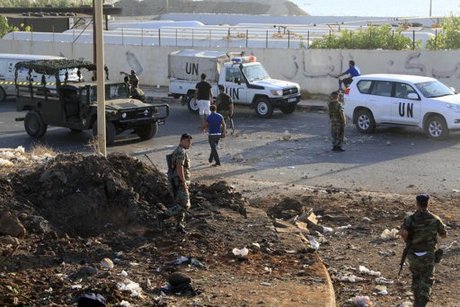 Israeli defense officials have said that the latest attack on UNIFIL stems from Hizbullah's fear that the U.N. peacekeeping force will seek greater freedom to search Lebanese villages for weapons without a previous coordination with the Lebanese army.

The bombing of the UNIFIL convoy near the southern port city of Sidon on Tuesday was likely aimed at sending a message to the peacekeepers to scale back their operations against Hizbullah, The Jerusalem Post quoted Israeli defense officials as saying.

The Israeli daily said Thursday that the Jewish state has been lobbying diplomats from countries which contribute troops to UNIFIL – particularly Spain, Italy and France – to get the U.N. to issue new rules of engagement for the peacekeeping force that will enable it to search villages without prior coordination with the Lebanese army.

According to UNIFIL’s current rules of engagement, the force is not allowed to enter southern villages to search for Hizbullah arms caches unless it coordinates the operation with the army.

But even If the new rules were approved by the U.N., they would still need the green light of the Lebanese government. This is unlikely given that the cabinet is led by Hizbullah and its allies.

Hiz... has used the 1701 to its own benefit. Using the "calm" and the presence of the multi national force, Hizb has been able to increase its arsenal and weapons and has consolidated its grip on the south. Every time the UN intends to patrol a village, they send their women, children, and thugs to pelt them with stones. I think the UNIFIL should withdraw from the south, and let the mujaheedine come out openly and liberate Galilee and what is beyond and beyond Galilee.

The threats against Lebanese freedom and UN mission are carried out by the provocative policy of the Zionist of Israel and Hezbolshaitan Hassouna radical terrorism.

Israel does the attack through its local Al-Qaeda cells and then puts the blame on Hezbollah. Typical retards. Second, the jurisdiction of UNIFL is solely under coerdination from the Lebanese Army and Government. Any Lebanese who thinks foreign troops from around the world should freely patrol the country are either ignorant and have no self respect or are on Israel's side.

And what about troops who take commands from foreign countries and have no regard for the law. Are they on "the lebanese" side? So pathetic when anyone against Hezballah is accused of being a traitor on Israels side.

@ JOHNWAYNE: take it easy on the dope my friend