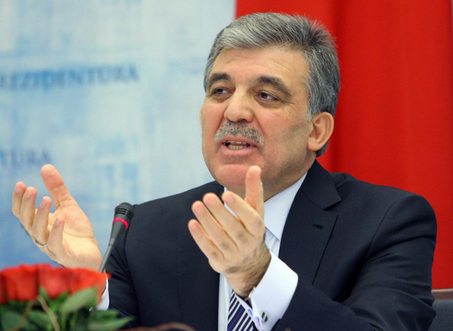 Turkish President Abdullah Gul called on Tuesday for a shift in government policy towards Syria after years of vocal opposition to the Damascus regime.

His comments came just a week ahead of peace talks aimed at ending the civil war in Syria that are due to open in Switzerland on January 22.

"I am of the opinion that we should recalibrate our diplomacy and security policies given the facts in the south of our country (in Syria)," Gul told Turkish ambassadors gathered in Ankara.

Turkey has long called for the ouster of President Bashar Assad but he remains in power in the face of an increasingly fragmented rebel movement almost three years since the uprising against his regime erupted in 2011.

Ankara has been accused by its Western allies of backing some of the more radical rebels in Syria and of shipping weapons to al-Qaida linked groups, allegations it has strongly denied.

But it does host the exiled Syrian opposition on its soil as well as hundreds of thousands of refugees fleeing the increasingly deadly conflict.

"We are pondering what to do for the realization of a win-win situation in the region," Gul said, saying it called for "patience, calmness... and, when necessary, silent diplomacy.

"Today's situation, however, represents a lose-lose scenario for each state, regime and people of the region. Unfortunately we see there are no magic formulas to reverse this picture."

Turkey found itself increasingly isolated over the civil war when the United States decided last year not to launch air strikes against the Syrian regime after an August chemical weapons attack.

The opposition National Coalition is due to debate on January 17 at a meeting in Istanbul whether to attend the so-called Geneva II peace conference.

The United States and Britain have told the opposition that they will stop their support if it fails to turn up.

The Syrian regime has said it will attend the negotiations but insists that Assad's departure is not on the table.