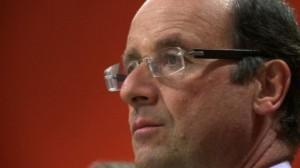 French President Francois Hollande said Tuesday that 700 people had left France to join the fighting in Syria in what he called a "worrying" trend.

"A certain number of young Frenchmen and young foreigners living in France... are fighting in Syria -- 700 are listed, that's a lot. Some are dead," Hollande told a press conference in Paris.

Hollande said young people needed to be warned about the dangers of going to Syria and that France needed to "fight against a certain number of networks and havens that sustain terrorism."

French officials have warned of the dangers from French citizens fighting with extremist and al-Qaida linked groups in Syria.

Paris prosecutor Francois Molins said this week that more than 400 people were either ready to go to Syria, were in the country or had been and returned.

Western security officials have raised fears that foreign fighters trained in Syria could carry out attacks on home soil.

Officials say about 20 French citizens have died in the Syria conflict.

The country was unsettled last week when reports emerged of two brothers who had converted to Islam dying within four months of each other in the conflict.

They are Sunni and so what. We all know that the Islamist extremist are Sunni. But in front there are lebanese and iraki Shiite also fighting.