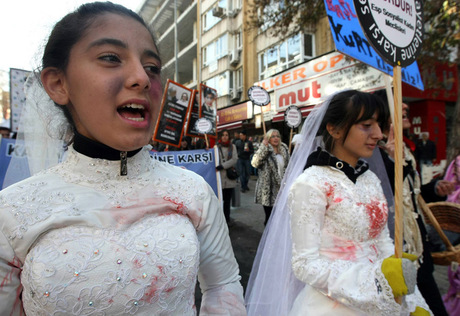 A women's rights group sounded the alarm on Wednesday about the prevalence of child brides in mostly Kurdish areas of eastern Turkey, saying hundreds of marriages involved girls under 15.

The report by the Women's Center (KAMER) was published just days after the apparent suicide of a 14-year-old mother of two hit the headlines in Turkey, highlighting the plight of young brides.

The poll, carried out in 23 provinces in mainly Kurdish areas of southeastern and eastern Turkey, found that 54 were married at the age of 12.

"We are fiercely opposed to child marriages... does anyone take into account their psychological state?" said Esra Gurcan, a local director of KAMER.

She highlighted the case of Kader Erten, who married at just 12 and who died of gunshot wounds in unclear circumstances on Sunday at the age of 14 after the death of her second child.

Her husband's family has said she committed suicide but her father has alleged it could have been murder.

"What kind of future could a girl have if she gets married at the age of 12?" Gurcan told Agence France Presse.

"I also got married at a very early age and I can sympathize with child brides. We know how grueling the outcomes of early marriages can be and we want to explain these especially to mothers."

The legal age for marriage in Turkey is 17 and the Turkish penal code stipulates prison terms of up to six months for those forcing marriage on under-age people.

Flying Broom, another women's rights group, cites poverty, religious belief, a lack of legal controls or a perception that a girl is safer with a husband as the main reasons for children getting married.

The KAMER report was issued just as a film about young brides called "Halam Geldi" or "My Aunt has Arrived" hit movie theaters in Turkey.

Umut Oran, deputy leader of the main opposition Republican People's Party (CHP), accused the government of turning a blind eye to the situation.

"Why do you not instruct imams not to allow religious marriages? Are you allowing child marriages because you expect at least three children from people?" he asked in a parliamentary question on Wednesday.

Prime Minister Recep Tayyip Erdogan came under fire in 2012 when he urged married couples to have at least three children despite failed attempts to reduce poverty and unemployment.

According to UNICEF, Turkey has one of the highest rates of child marriage in Europe.

Girls usually marry a much older man, a widower or even a man who has raped her, according to a study published by Gaziantep University in October which also found that over 80 percent of child brides in Turkey are illiterate.