Confrontation as Journalist Asks Al-Sayyed 'Don't You Fear Returning to The Hague as Suspect?' 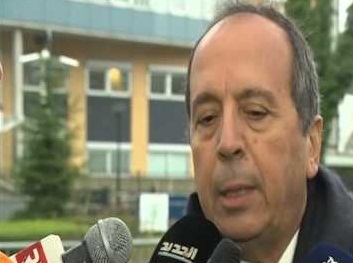 Former General Security chief Jamil al-Sayyed did not succeed in attaining the goals he had set by attending the opening sessions of the Special Tribunal for Lebanon, which is probing the assassination of former premier Rafik Hariri.

Al-Sayyed appeared to be isolated in the gallery where politicians and journalists were seated to follow-up on the trial's work, except for the lawyer of Hassan Merhi, the fifth suspect in Hariri's assassination.

The attendees remarked that al-Sayyed left the gallery for over an hour during Thursday morning's session and did not return to the courtroom in the afternoon.

A reporter tried to provoke al-Sayyed by asking about his impression while watching the images of the explosion that killed Hariri.

"I did not feel a thing,” he responded. “A person who gets imprisoned for four years can no longer be affected by such images.”

"What about those that wear jailed for 11 years?”, the reporter then asked, referring to Lebanese Forces leader Samir Geagea.

"It depends on what they have committed,” al-Sayyed replied.

The journalist, who is known for her support to Geagea, continued asking al-Sayyed: “Don't you worry about returning back to The Hague as a suspect in Hariri's assassination?”

He said: “Maybe it would be better. Then, I would be able to face the trial as an insider.”

“You know that I never give up my rights,” he added.

“And if Geagea has something to say in the trials he had gone through, he only has to ask for reopening all cases in which he was tried. And I am here to confront the STL and to demand reopening the case of the false witnesses whose testifications caused my imprisonment,” al-Sayyed explained.

"Let Geagea do what I am here to do today if he was really unfairly tried.”

The dialogue between al-Sayyed and the reporter was not interview, but more of a skirmish that was heard by many attendees of the STL's opening session and was commented on during the break.

He makes a lot of sense for non politically affiliated person. He should be compensated for being jailed for 4 years.

You also do make a lot of sense.

The colombiana is the best. Better than the baalbaki. There r sprinkles of cocaine on the weed. Jajaja

Seguro, clearly he could be planning 2 blow up Saad in Holland.

Primesuspect: you diss Lebanese hash?? Carajo!
You, mister, are an unpatriotic Zionist lackey.
And imberialist too.

What a joker this jamil, poor him...

I think the question the Journalist and both M8 and M14, should ask the question to the three intelligence agencies including HA and Syrian intell. a simple question? weren't you in control of the country at that day, and is it that impossible to transport 2500Kg of TNT through out the country. If you were in control - then you got to jail for life.

dearest @wolf: What are these signs and characters before and after your name? Do they carry any significance? Does it mean you are an important person? Please, elaborate.

Those are his strips he has been promoted to corporal.

The arrugance that this guy has is unbelievable: The question that begs to be asked. If you and the intelligence agencies in Lebanon at the time of the explosion and assination, from Syrian Intel, to HA, to Israeli's whoeverthe affiliations are, and in particlular JA Sayyed himself, How can someone transports 2500kg of TNT in such a small country without the knowledge of these apparatus that they are raoming in Lebanon like flies. If all they all answered "NO" then they should go all to jail for life Period.

"What about those that wear jailed for 11 years?”

Well, that massacred thousands of Lebanese, including the entire Frangieh family, in cold blood. 11 years is nothing.

this criminal and traitor wont shut up ... this is the assad school they are used to hide proofs to their crimes and they always emerge innocent!
Jamil is still living his old glories and am sure any trial will prove him killing kidnapping and jailing people for no reason..
yalli sta7a met.

That would be an Excellent question to ask!

al-Sayyed is a good for nothing Assad thug and will never be anything els.

Sayed is a bold criminal ... he got used not to be questioned like all assad dogs are... he thought may be this trend will last forever...
by Lebanese or international law his place is in jail