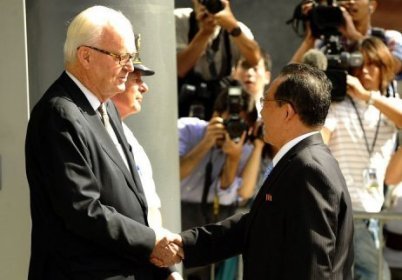 The United States tested North Korea's willingness to negotiate giving up its nuclear arsenal on Thursday in talks that a top North Korean official said had been "constructive".

"The atmosphere was good, the meeting was constructive and interesting. We exchanged views on general issues," North Korea's first vice foreign minister Kim Kye-Gwan said during a break on the first day of the talks in New York.

Kim negotiated with the U.S. special envoy on North Korea, Stephen Bosworth, at the U.S. mission to the United Nations in what Washington has insisted are just "exploratory" talks.

The United States has stressed that it wants to see if the Pyongyang regime is serious about living up to past commitments on its nuclear weapons.

The United States considers progress on disarmament to be key to any hopes of improving six decades of hostile U.S.-North Korea ties.

The invitation to New York was made after a meeting between the nuclear envoys from North and South Korea at an Asian security forum in Bali, Indonesia last week.

The international community is anxious to see North Korea return to six-nation nuclear disarmament talks, which broke down in late 2008.

North Korea agreed in principle in 2005 to scrap its weapons program, but staged nuclear tests in 2006 and 2009.

The North's disclosure in November that it had a uranium enrichment plant, adding a new means to produce atomic weapons, has become a new complicating factor in the talks the North has held with the United States, China, South Korea, Japan and Russia.

"Words are not enough," Toner told a Washington briefing. "We need action."

The New York talks are "a chance for us to sound out the North Koreans" and "gauge their seriousness", the spokesman said.

The North highlighted its mistrust of U.S. motives ahead of the talks.

At a U.N. debate on disarmament on Wednesday, the North's U.N. ambassador Sin Son Ho said a proposed U.S. missile defense shield in Europe would spark a "new nuclear arms race" and that the United States had no "moral justifications" to lecture other countries about proliferation.

North Korea's official news agency however said in a commentary Wednesday that an agreement with the United States formally ending the 1950-53 Korean War could become a "first step" to peace on the Korean peninsula and "denuclearization."

Diplomats and experts have warned that the North is unlikely to make concessions in the talks.

In a sign of the diplomatic minefield that the United States has been navigating in its dealings with North Korea, an aide accompanying Bosworth was seen carrying a copy of "How Enemies Become Friends," a recent book by Charles Kupchan, a former adviser to president Bill Clinton, into the meeting.

Kupchan champions the cause of U.S. engagement with its enemies in the book.

"The absence of trust on both sides is at this point so significant that a kind of grand bargain (between the U.S. and North Korea) is unlikely -- if only because it wouldn't pass muster with domestic skeptics here in the United States, particularly on Capitol Hill," Kupchan told Agence France Presse.

He suggested that interim measures such as North Korea allowing inspections of certain sites or western powers giving more assistance and economic aid to the impoverished North could help "the confidence building measures broaden into the trust needed to strike a lasting deal."