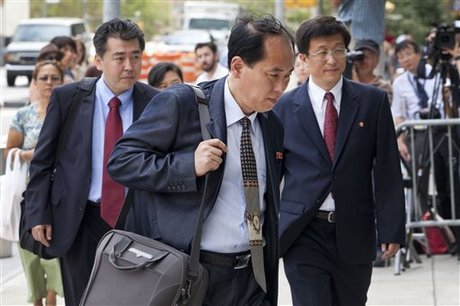 The U.S. special envoy on North Korea, Stephen Bosworth, and the North's first vice foreign minister Kim Kye-Gwan held about 4.5 hours of talks at the U.S. mission to the United Nations.

Kim arrived at the U.S. mission to the United Nations at 1400 GMT to start the second and final day of negotiations. Neither side made any comment.

The U.S. State Department said the first day of meetings in New York had been "serious and businesslike." Kim also called the atmosphere on the first day "constructive."

The United States has stressed that North Korea must make moves to scrap its nuclear weapons if six decades of tensions are to be ended.

U.S. Secretary of State Hillary Clinton has said the talks were "exploratory" to determine whether North Korea is ready to carry out a 2005 accord and take "concrete and irreversible steps toward denuclearization."