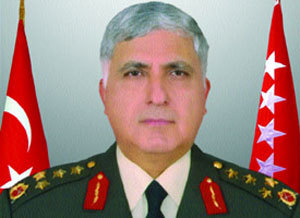 "The president has approved the assignment of military police chief General Necdet Ozel as the land forces commander. General Ozel is deployed as acting chief-of-staff," it said in a statement.

Turkish President Abdullah Gul, commander-in-chief under the constitution met with Prime Minister Recep Tayyip Erdogan and Ozel on Friday evening, leading analysts to speculate that Ozel was likely to become the new chief-of-staff.

According to previous army practice, an officer should serve as commander of land forces before becoming chief-of-staff, media reports said.

NATO member Turkey's entire military top brass, including the chief-of-staff General Isik Kosaner and the commanders of the army, air force and navy resigned Friday in a row with the government over generals jailed for an alleged coup plot.

Kosaner stepped down after several meetings with Erdogan in recent days ahead of an early August meeting of the army's high command which decides on promotions for senior officers.

Media reports blamed tensions between the military and Erdogan over army demands for the promotion of dozens of officers being held on suspicion of involvement in an alleged anti-government plot.

Forty-two generals and dozens of officers are in jail in a probe of alleged plots to unseat the government led by the Justice and Development Party (AKP), the moderate offshoot of a banned Islamist movement.