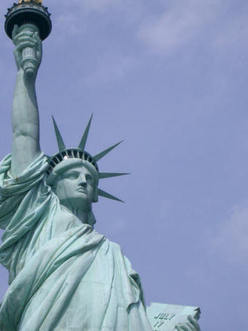 Kyrgyzstan on Friday dismantled a "Statue of Liberty" in the center of the capital Bishkek, mocked for its apparent resemblance to a widely disliked former First Lady.

Workers in the early hours took down the towering statue, which depicted a female angel sitting on top of a globe and holding aloft the roof of a traditional yurt.

Critics complained the statue bore an unfortunate resemblance to the widely disliked wife of ousted president Askar Akayev, who was forced out of power in 2005 in the Tulip Revolution.

"A statue resembling Akayev's wife shouldn't be standing in the center of the capital," said the leader of the pro-government Youth Council, Mavlyan Askarbekov, quoted by the Interfax news agency.

Akayev fled to Russia in 2005 with his wife Mairam, who frequently accompanied him in public and was seen as wielding large influence.

The statue was erected in the city's main square in 2003 under Akayev's rule, replacing a Soviet-era monument to Bolshevik leader Lenin.

It is not the first time Kyrgyzstan has tried to shake off its troubled recent past.

Earlier this year, the raucous parliament sacrificed sheep in an attempt to rid the legislature of "evil spirits." And it is currently debating plans to replace the country's flag, coat of arms and national anthem.

The impoverished ex-Soviet nation went through a series of violent clashes last year when a bloody revolution unseated Akayev's successor, Kurmanbek Bakiyev, in April and was followed by deadly inter-ethnic clashes in the summer.

Kyrgyzstan is due to hold a presidential poll in October as part of its bid to make Central Asia's first-ever transition to a parliamentary democracy.