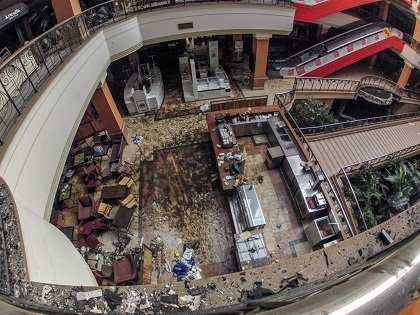 "There was general information on the impending terror attack on all the malls and other strategic Western interests, especially in Nairobi," the parliamentary report read, quoted by Kenya's Sunday Nation newspaper.

Warnings of an attack were made in August and again just 19 days before the September 21 attack on Westgate, when gunmen stormed the upmarket mall hurling grenades and shooting shoppers and staff, the report notes.

Another security report, issued a year to the day before the Westgate siege began, specifically said the Shebab were planning to attack the partly Israeli-owned complex.

"Another intelligence briefing in February 2013 warned of attacks like those that happened in Mumbai in late 2008, where the operatives storm a building with guns and grenades and probably hold hostages," the report read, quoted in the newspaper.

"It is unclear what measures were put in place to prevent the attacks."

Somalia's Islamist Shebab said the attack was a warning to Kenya to pull its troops out of southern Somalia, where they are fighting the Shebab as part of an African Union force.

The report is also critical of how various security forces -- including police, army and special forces -- handled the four-day siege, noting the "poor coordination by the multi-agency forces during the operation".

It also criticized a "nationwide systemic failure" of the immigration department, with widespread corruption in the issuance of identity cards.

The report, the result of investigations by the joint parliamentary committee of National Security and Defense and Foreign Relations, is expected to be discussed when parliament reopens next month.

Four men are on trial in Nairobi for allegedly providing logistical support to the attackers.

All the gunmen in the Westgate siege -- understood to have totaled four, not the dozen that security forces initially reported -- are believed to have died during the attack, according to the U.S. Federal Bureau of Investigation.

Western officials have suggested that as many as 94 people could have died in total in the attack.