Roux: Too Soon to Verify Viability of Nasrallah’s Evidence in Hariri Murder 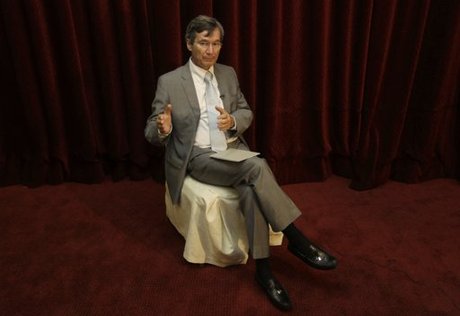 Head of the Special Tribunal for Lebanon Defense Office Francois Roux stated that nothing is off limits in defending suspects in the trial of the assassination of former Prime Minister Rafik Hariri, saying that their lawyers can bring up any matter related to the case, especially regarding the legitimacy of the court and the prosecutor’s evidence.

He noted however to the Kuwaiti al-Rai newspaper in remarks published on Sunday that the transparency of the court should not be questioned at the moment because it hasn’t conducted its judicial work yet.

The investigations in the murder should be addressed instead, he added.

The Defense will have the opportunity to question the credibility of the investigations and evidence, stressing that the arguments should be judicial and not political.

Contrary to what has been reported, the STL will take the right decision, Roux continued.

Asked if Hizbullah chief Sayyed Hassan Nasrallah’s evidence in the assassination is viable, he relied that it is impossible at this point to determine the viability of his evidence.

Only the Defense team can make that conclusion and present evidence that can acquit their clients, he said.

Pre-Trial Judge Daniel Fransen only has what the head of the investigation has presented him, he remarked

The defense lawyer is responsible for determining whether this evidence can be used to defend the innocent, Roux stated.

Asked about his alleged comments that he described STL Prosecutor Daniel Bellamre as his enemy, Roux clarified that he had simply labeled him as an opponent.

The judicial debate is not a battlefield, he emphasized.

On Bellamare’s alleged ruling of Israel of being behind Hariri’s murder, Roux denied that the prosecutor had eliminated that possibility.

He explained that he does not have any information on his investigation in that possible lead, adding that the Defense can carry out the necessary investigations in that matter.

In August 2010, Nasrallah unveiled in a press conference several undated clips of aerial views of various areas in Lebanon, including the site of the Hariri assassination in west Beirut.

Nasrallah, who has accused Israel of the February 14, 2005 bombing which killed Hariri and 22 others, said the footage was intercepted from unmanned Israeli MK surveillance drones.

He conceded the images were not conclusive proof but noted that his party -- which is believed constantly under surveillance by its arch-foe Israel -- had no offices, positions or presence in the areas surveyed.

It is enjoyable to watch the heads of terrorists supporters explode over the STL. Get used to it Le Big Phlegm. The STL is coming. If/when found guilty, the murderers and their supporters will face a noose the likes of which one can only find in the Dahieh and in how Iran treats its bootlickers.

phenicien and the other rats : shut up