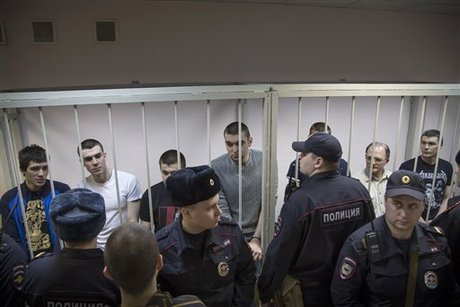 Russian police detained hundreds of protesters Monday outside a court that sentenced seven activists to prison terms of up to four years for demonstrations against Vladimir Putin's third presidential inauguration.

The Moscow court sentenced the seven defendants to penal colony terms of between two and a half and four years for what the judge ruled to be "mass riots" during the 2012 demonstrations, a high-profile case that has become a symbol of the harsh crackdown on opposition protests since Putin returned to the Kremlin.

Several hundred supporters gathered outside the court shouting slogans as security forces and riot police ordered them to disperse.

More than 200 people were detained for "attempts to breach public order", a Moscow police spokesman told Agence France Presse. Some of those detained wore prison uniforms, while one wore a Putin mask.

Lawyer Dmitry Agranovsky called the sentences excessive after his client, Yaroslav Belousov, was sentenced to two and a half years.

"The sentences are harsh and inappropriate. They were issued based on the political situation, not on the nature of the charges," he said.

An eighth defendant, the only woman in the case, was given a suspended sentence of three years and three months.

The eight defendants were found guilty on Friday of taking part in mass riots and hitting policemen at a rally ahead of Putin's inauguration on May 6, 2012.

Most of the defendants have been held in custody since 2012.

Amnesty International called the guilty verdict against the activists a "hideous injustice" and condemned the hearings as a "show trial".

The court had postponed the sentencing until Monday in a move viewed by the opposition as an attempt to avoid publicity during Sunday's closing ceremony of the Winter Olympic Games in Sochi.

Two members of protest punk band Pussy Riot who were released from prison in December, Nadezhda Tolokonnikova and Maria Alyokhina, were among those supporting the defendants outside the courthouse.

Both women were detained, Alyokhina wrote on Twitter, posting a photograph of them sitting in a police van.

Protest leader Alexei Navalny was also held, writing on Twitter that police were "detaining people without any reason".

The case was opened after street clashes on Bolotnaya Square in central Moscow, after tens of thousands marched through the city center in protest at Putin's return to the Kremlin.

Judge Natalya Nikishina said Monday as she began reading out the sentence that the defendants "took part in mass riots, their shared blame is established and proved".

The clashes on Bolotnaya Square led to dozens of arrests and injuries on both sides. Investigators have said the opposition planned to overthrow the government and destabilize the country.

The defense said the case was based entirely on conflicting police testimonies that were not supported by any evidence, and that the scuffles could not be qualified as mass riots due to a lack of grave injuries or property damage.