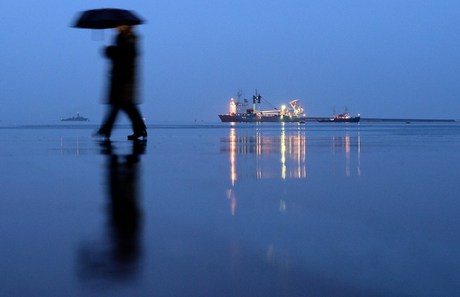 In the region of western Transcarpathia, the large Hungarian minority has grown increasingly uneasy.

Stick-wielding members of Pravy Sektor, the far-right paramilitary group that was on the frontline of bloody protests to depose Yanukovych in Kiev in February, stormed the town hall in Berehove, a town of around 24,000 people, last week.

A government building in the regional capital of Uzhhorod has been occupied since mid-February, with Pravy Sektor activists in red and black armbands standing guard outside.

Hungarians make up around half the town's population, and around 12 percent of Transcarpathia as a whole.

They strongly backed Yanukovych in the 2010 presidential election, seeing him as more supportive of minority rights than Ukraine nationalists such as his predecessor Yulia Tymoshenko.

Yanukovych scrapped a Tymoshenko directive that college entrance exams should be in Ukrainian only and officially recognized minority languages in 2012.

One of the first acts of the new government last week was to overturn these measures, drawing ire from minority groups.

"Many (Hungarians) voted for Yanukovych in 2010 knowing that he was corrupt and ruinous for the economy," Elemer Koszeghy, editor of a Transcarpathian Hungarian-language newspaper, told Agence France Presse.

"The point was he wouldn't hammer them for not being Ukrainian like Tymoshenko did."

Such sentiments get short shrift from the group occupying the Uzhhorod government building.

"We like Hungarians and the other minorities here. We want them to be part of building a European Ukraine, but we have to fight the Russians," said Andriy Fedunets, 20, in the lobby of the building, as he watched footage from Crimea on a laptop.

Transcarpathia, cut off from the rest of Ukraine by the Carpathian mountains, was part of Hungary until after World War I.

It then changed hands several times, falling under Soviet rule after World War II when thousands of Ukrainians and Russians were settled in the region.

Some 1,300 kilometers (800 miles) from Kiev and bordering Poland, Slovakia, Hungary and Romania, it finally became part of independent Ukraine in 1991.

Some 1.2 million people live there, with Hungarians the largest in a patchwork of ethnic groups.

This has not endeared the Hungarian minority to the new interim government that emerged from the Maidan movement, named after Kiev's central Independence Square that was the epicenter of the protests.

"Some Ukrainians say we are 'anti-Maidan'," said Viktoria Szabo, a 20-year-old waitress in Berehove.

Now locals are fearful that they may even be drawn into a possible armed conflict over Ukraine's Russian-speaking peninsula of Crimea jutting into the Black Sea.

"We have bad experiences of fighting in other people's wars," Szabo says, referring to ethnic Hungarians conscripted to fight in Yugoslavia during the 1990s wars.

"This region is more central European than eastern, it's peaceful, tolerant," Laszlo Brenzovics, head of a Hungarian-language college in Berehove, told AFP.

"What happens in Kiev or Crimea is none of our business," said Szabo. "It's not our fight."