Shaaban: Turkey Will Hear Stronger Statements from us When its FM Visits Damascus 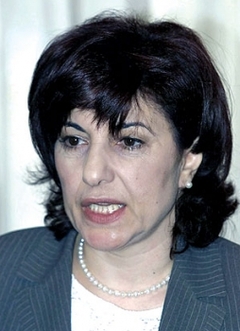 She said in a statement: “If the Turkish foreign minister believes that he is arriving in Syria to deliver a firm message, then he will hear a firmer message from us.”

She slammed Turkey’s stand on the unrest in Syria, noting that it “hasn’t even condemned the brutal crimes against the civilians, security forces, and army.”

Over the weekend, Turkish Prime Minister Recep Tayyip Erdogan announced that his country’s patience over the regime crackdown against protestors has ended, adding that Davutoglu will visit the Arab country on Tuesday to deliver a “firm message.”

These guys are smoking dope! They don' t realise the heat is going up, and the circle is closing on them! They don' t understand what ' s really going on with them, fron the UN resolution, to Medvedev warning, to the GCC vew position , to Turkey' s....... Soon they' ll find out that Turkey's army (with or wothout NATO?) has created a safe heaven on Syrian territory on humanitarian grounds...But that may serve as a springboard for Syrian opposition like Benghazi was in Lybia! Wait ya Buthaina, speak firmly to the UN, to Turkey , to the US, we' ll see where that will lead you too very soon......You think you can speak to the World the way you deal with poor Lebanon! They' ll sort you out soon and get your statements right!

Ugly snake this woman is.... or is she a woman?

How can you sleep at night after you wash your makeup from your face and the reality of the massacre of thousands of innocent women and children that your master Bashar ordered in his own country?
Let's assume the terrorists are inside Syria as you claim, is this how you handle your internal security by making the Hamah women dress like you with makeup so that they are considered Western or Allawites to run away from their homeland otherwise the internal security forces at the checkpoints are shooting them in the back and head as the hospitals are revealing. Shame on you if the Turks are feeling sorry for the Arabs.

Bouthaina, you are better off keeping your mouth shut, or once this is over, and it WILL be over, and Bashar WILL lose, you will be trouble...

So bigdig.. now it is IF the Salafis take power? before it was "will never happen". next thing you know it will be WHEN..lol... Dont worry.. this whole salafi story is just to scare the likes of you. Syria is not an extremist country.
It is a matter of time now before that is proven to you.
Other extrimists in the area, namely HA will be wiped out thanks to the new people's syrian government.
Sit back and enjoy the show.. i'm gonna go make some popcorn.