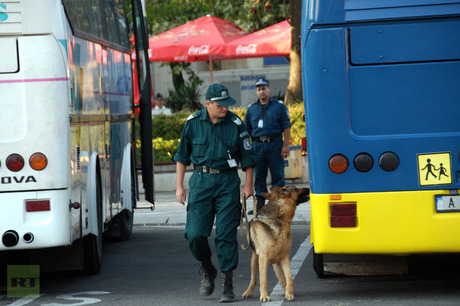 A policemen was killed and three were injured Friday in Bulgaria as a standoff with a gunman who threatened staff and pupils at a nearby school turned deadly.

Petko Savov, 53, had barricaded himself in his flat in the northern town of Lyaskovets and was firing on police, said officials.

Special forces were deployed to the scene, and local media reported that negotiators were trying to talk Savov into surrendering.

The police had initially come to question Savov over the threats he had sent to the director of the Maksim Raykovich school.

School director Nikolay Kozhuharov told public BNR radio that he had alerted police on February 20 after receiving a series of notes from Savov threatening him, the teachers and the students.

"He said there was a lot of noise from the school, disturbing him and his mother, adding that he was a hunter and things would end badly," Kozhuharov told the station.

Media reports said the man was unemployed and had mental problems.

All classes at the school were canceled and police sealed the area. Electricity, gas and water supplies to Savov's apartment block were cut and residents were evacuated.