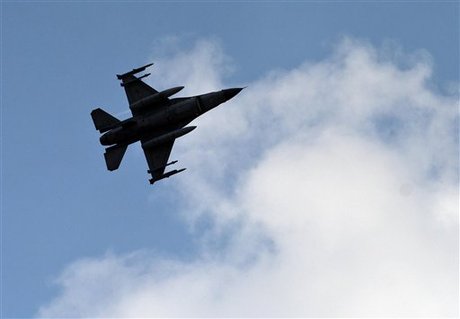 Syrian rebels on Monday overran a key village on Turkey's border as Syria's air force launched raids along the frontier a day after Ankara's jets shot down a regime warplane.

The Syrian Observatory for Human Rights said that the rebels were now in full control of Kasab, the first border crossing with Turkey seized by opposition fighters in sensitive Latakia province, President Bashar Assad's heartland.

"The rebels are in control of the Kasab border crossing with Turkey," he told Agence France Presse, four days into a rebel offensive targeting the area.

According to a security source in Damascus, however, the village has in fact not fallen.

"The situation is unclear, the fighting continues, and neither side is in control of the village," the source said.

The battle for Kasab, launched by Islamist rebels and their jihadist ally Al-Nusra Front, killed at least 130 regime and opposition fighters on Saturday and Sunday alone, said the Observatory.

Kasab is important because of its strategic location in a mountainous area on the Turkish border.

The village is also significant because it is located in Latakia province, the heartland of Assad's Alawite sect.

The rebel advance came despite Syria's air force carrying out strikes and dropping barrel bombs on their positions in the Kasab area and in nearby Jabal Turkman, said the Observatory.

Because of the fighting and the air strikes, most of Kasab's majority Armenian residents have fled, Abdel Rahman told AFP.

"The rebels are in control of Kasab, but Kasab is now extremely dangerous because of the air strikes and the nearby fighting," he said.

The reports come a day after Turkey downed a Syrian warplane, in what the Assad regime described as a "flagrant act of aggression".

It was the most serious incident involving Ankara and Damascus since Turkish warplanes last September downed a Syrian helicopter that was two kilometers (a mile) inside its airspace.

Turkey, which backs the uprising against Assad, warned Damascus against testing its determination and pledged a tough response if Syrian warplanes violate its airspace again.