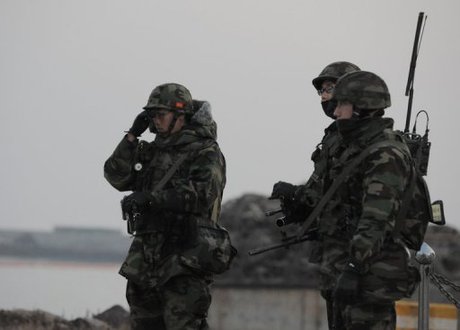 The incident highlights the tensions along the disputed borderline, which has been the scene of bloody naval skirmishes in recent years.

The ministry said its troops heard the sound of three shells and saw one of them fall near the border known officially as the Northern Limit Line (NLL).

"In response, we fired three shots that landed near the NLL," a ministry spokesman told Agence France Presse, adding that the North's shell landed near Yeonpyeong Island but the situation was now stable.

Officials did not specify where the South fired from, but it appeared to be from a marine unit based on the island.

An unidentified government official quoted by Yonhap news agency said: "One shot (from the North) crossed the NLL but I don't think it's something serious.

"We're trying to establish whether the shots were fired intentionally or accidentally."

YTN Television quoted a government source as saying the North's shots were fired in the course of an ongoing military drill.

The South also accuses the North of torpedoing one of its warships near the NLL in March 2010, with the loss of 46 lives.

The North denied the charge but last November shelled Yeonpyeong, killing four South Koreans including two civilians. The North said it was responding to a South Korean artillery drill which encroached into its waters.

Wednesday's firing by the North sparked a brief panic on Yeonpyeong, where some 1,800 civilians live along with a marine garrison.

"The residents were preparing to evacuate their homes for shelters since they went through a similar thing in the past," a spokeswoman for Ongjin county, which oversees the island, told AFP.

"But they did not actually move to shelters since things have calmed down," the spokeswoman said, adding that the North's shells apparently landed on its own side of the NLL.

The defense ministry spokesman said the North's firing started at 1 pm (0400 GMT). "At 1:25 pm, we broadcast a warning and at 2 pm, we fired three warning shots from K-9 guns," the spokesman said.

"The situation is now stable. After we fired back, there was no further response from the North. We are still on alert but it seems that there will be no further provocative acts from North Korea at the moment."

Troops on Yeonpyeong and other frontline islands have been on high alert since last November's deadly bombardment, which damaged scores of buildings. The government has reinforced troops and sent extra weaponry to the islands.

The incident came after the North made apparent peace overtures and expressed interest in restarting stalled nuclear disarmament talks.