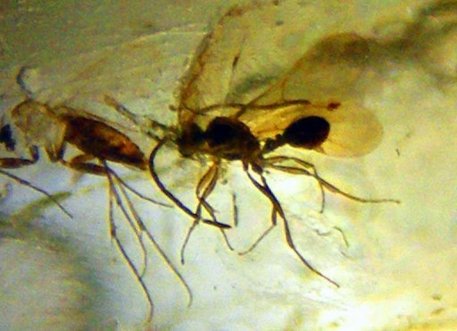 Researchers in Peru said Tuesday they have discovered the remains of ancient insects and sunflower seeds trapped inside amber dating from the Miocene epoch, some 23 million years ago.

"These new discoveries are very important, because the insects and sunflower seeds confirm the type of climate that existed during the Miocene period," Honninger said in a telephone interview from the northern city of Chiclayo.

The insects trapped in the amber -- fossilized tree resin -- are extremely well preserved and include ancient beetles, barklice, flies and spiders.

Honninger, director of the Chiclayo-based Meyer-Honninger Paleontology Museum, said that the experts discovered "an unknown species of arachnid" with a head like a dog and legs four times longer than the body.

The discovery was made in April in the Santiago River area of northern Peru.

Extreme climate change from the Miocene epoch (23 to five million years ago) was likely the reason the insects became extinct, Honninger said.

The same team of researchers announced in January it had discovered a fossilized squid from the Cretaceous era (145 to 65 million years ago) some 3,700 meters (12,100 feet) above sea level in the Maranon River Valley, also in far northern Peru.