Iraq Forces Kill 19 as Unrest Spikes ahead of Polls 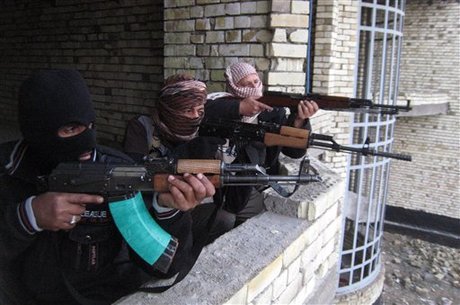 Iraqi security forces said they killed 19 militants while attacks elsewhere in the country left three people dead on Monday, as violence spikes ahead of parliamentary elections.

The April 30 polls, Iraq's first since 2010, come as the authorities battle the worst sustained period of bloodletting since 2008, when Iraq was just emerging from a brutal Sunni-Shiite sectarian war that left tens of thousands dead.

The unrest, which has already killed more than 2,400 people this year, has been principally driven by anger in the Sunni Arab minority over alleged mistreatment at the hands of the Shiite-led government and security forces, as well as spillover from the civil war in neighboring Syria.

In clashes south of Baghdad, as well as in and around the conflict-hit cities of Ramadi and Fallujah to the west, Iraqi police and soldiers killed 19 militants, according to interior ministry spokesman Brigadier General Saad Maan.

He did not give details of any casualties suffered by the security forces.

Fallujah and Ramadi lie in the western desert province of Anbar, which shares a long border with Syria.

In January, militants overran all of Fallujah and parts of Ramadi, and while security forces have managed to wrest back control of most of Ramadi since then, a stalemate has persisted in Fallujah.

Elsewhere in the country, security and medical officials said, the authorities found the corpses of two men in different neighborhoods of Baghdad, their bodies bearing signs of torture, while a policeman was gunned down north of the capital.

Diplomats and analysts have urged the government to reach out to the Sunni community to undermine support for militancy.

But with the parliamentary elections looming, Prime Minister Nouri al-Maliki and other Shiite leaders have been loath to be seen to compromise.