Strange Planet is Blacker Than Coal 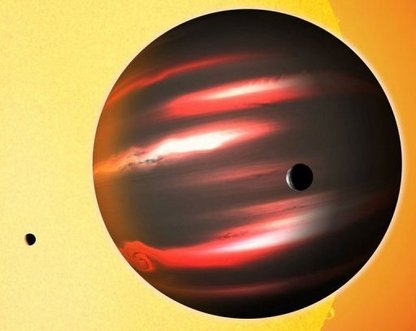 A planet orbiting a distant star is darker than coal, reflecting less than one percent of the sunlight falling on it, according to a paper published on Thursday.

The strange world, TrES-2b, is a gas giant the size of Jupiter, rather than a solid, rocky body like Earth or Mars, astronomers said.

It closely orbits the star GSC 03549-02811, located about 750 light years away in the direction of the constellation of Draco the Dragon.

"TrES-2b is considerably less reflective than black acrylic paint, so it's truly an alien world," David Kipping of the Harvard-Smithsonian Center for Astrophysics said in a press release issued by Britain's Royal Astronomical Society (RAS).

This is scorchingly close when compared to Earth's 150-million-km (93-million-mile) distance from the Sun and Jupiter's 778-million-km (483 million miles).

So fierce is the heat that the exoplanet's atmosphere is cooked to more than 1,000 degrees Celsius (1,800 degrees Fahrenheit).

Signatures from its atmosphere point to the presence of light-absorbing chemicals like vaporized sodium and potassium or titanium oxide.

But none of these substances can explain the planet's darkness, which is more extreme than any planet or moon in our own Solar System.

"It's not clear what is responsible for making this planet so extraordinarily dark," said David Spiegel of Princeton University.

"However, it's not completely pitch black. It's so hot that it emits a faint red glow, much like a burning ember or the coils on an electric stove."

More than 500 extra solar planets have been identified since 1995.

TrES-2b, like our Moon, is believed to be locked by gravitational tide, presenting only one face to its star.