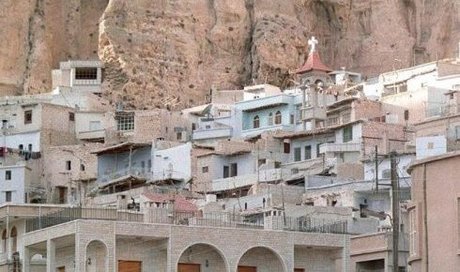 Syrian troops retook the ancient Christian town of Maalula from rebels Monday, a day after President Bashar Assad said the three-year old civil war was turning in his favor.

"The army has taken full control of Maalula and restored security and stability. Terrorism has been defeated in Qalamun," a security official told Agence France Presse, referring to the region in which Maalula is located.

An AFP journalist in Maalula said the Al-Safir hotel, which rebels had been using as a base, was almost completely destroyed, with a facade that gave on to a cliff having collapsed.

Downhill from the hotel, the Mar Sarkis Greek Catholic monastery was also damaged, its walls pierced by mortar rounds, and icons and other religious objects strewn on the ground inside.

Those residents who had not fled Maalula in previous fighting were nowhere to be found.

"The village was taken quickly. This morning we took Al-Sarkha village" on a hill overlooking the town, "then we came towards Maalula," a soldier told AFP.

Maalula's capture comes after a string of successes in the strategic Qalamun region, including the seizure of the former rebel bastion of Yabrud last month.

The regime has prioritized capturing the area to protect the highway linking Damascus to Homs that runs through the region, as well as to sever rebel supply lines across the border with Lebanon.

Hizbullah, which has sent thousands of fighters to support Assad's troops, has played a key role in helping the regime secure Qalamun.

Maalula fell to rebel forces last December, but the Syrian Observatory for Human Rights said the regime and Hizbullah are now in "near-total control of the Qalamun area."

Observatory director Rami Abdel Rahman said: "Pockets of opposition fighters remain near the Lebanese border, in the hills and in areas near Rankus" which fell to regime control last week.

Abdel Rahman also said negotiations are underway to ensure Zabadani, a nearby town of which parts are under opposition control, is not bombarded by the army.

Picturesque Maalula is considered an important symbol of the ancient Christian presence in Syria.

After the town was captured by rebels, 13 nuns were seized from the Mar Takla Greek Orthodox convent and held by al-Qaida-affiliated fighters until a prisoner swap with the regime in March.

Maalula's fall comes a day after Assad said his government was gaining the upper hand in the conflict that began in March 2011 and has left more than 150,000 people dead.

"This is a turning point in the crisis, both militarily in terms of the army's achievements in the war against terror, and socially in terms of national reconciliation processes and growing awareness of the truth behind the (attacks) targeting the country," state news agency SANA quoted the president as saying.

"The state is trying to restore security and stability in the main areas that the terrorists have struck," said Assad, adding, "we will go after their positions and sleeper cells later."

The conflict began as a peaceful protest against Assad, but morphed into a brutal civil war after a brutal crackdown. The regime has systematically blamed all violence on a foreign-backed "terrorist" plot.

Elsewhere in Syria on Monday, warplanes struck parts of the central city of Homs that have been under suffocating government siege since June 2012, said the Observatory.

Activist Abu Ziad, who is trapped inside, told AFP via the Internet that there has been a marked escalation in the bombing of besieged areas, with the army "trying to storm (the rebel areas)... under cover of fire."

Earlier this year the U.N. oversaw the evacuation of around half of some 3,000 people trapped in the area.

According to Abu Ziad, some 180 civilians including 60 activists and more than 1,200 rebel fighters, remain inside.

Meanwhile, the Organisation for the Prohibition of Chemical Weapons (OPCW) said Syria has surrendered "65.1 percent" of its chemical weapons arsenal, "including 57.4 percent of priority chemicals."

Under the terms of a U.S.-Russia brokered deal reached last year, Syria has until the end of June to destroy its chemical weapons.

The agreement was reached after deadly chemical attacks near Damascus last August that killed hundreds. The West blamed that on Assad's regime which, in turn, pointed the finger at rebels.

this phoenix is an clear m8 thug, and he was uncovered long time ago.

before saying mabrouk Syria, I would advise these m8 thugs that this taking back of maaloula has no military meaning and soon it will fall again.

however, go check how many of hizbushaitan were killed first before congratulating each other :)

the stupidity of m8 thugs never stops to amaze me :)

About time Maloula was freed again. Lets hope Nusra stays out this time.

Yeah mabroub until those driven out receive anti missiles and the game changes back and forth such as the Lebanese 30 year of war that you and your boyfriend FT have not learned from at which point this time they will massacre this poor town. The language you only understand is force therefore for every single action you will receive an opposite and equal reaction that will cost an entire nation the cost of your convoluted racist equation, otherwise you launch the mafia assisination war games on the political frontier if you can't win the battle by force.

since yabroud fell how many car bombs in lebanon?
who ended up being right? who did what it takes to defend this country? always the same, while all the others ever do is whine and stall.

mowaten: the question to be asked is " How many car bombs and lost Lebanese lives since HA involvement in Syria".

the day i see your head chopped ya ft/movaten, is the day i will be dancing in the streets

you two losers urgently need to get a life.

@Jaafar: Let it be known Any attack and I mean Any attack on samy(..) is considered a personal attack on ice-man and vice versa. Samy and I are bound by a brotherly treaty of mutual defense similar to the one that ties Lebanon and Syria. Samy is one of the most respected posters on this forum and I will not stand idle when I see you unjustifiably take jabs at him. Enough is Enough!

you two losers urgently need to get a life.

@mowaten: I am consciously de-friending you!

see what i mean? mowaten is here all day every day, posting absolutely nothing of substance. no opinions, no arguments, no factual input, nothing. only disruption attempts. how could he possibly be a genuine reader?  he's probably the least dangerous (because he's so obvious and shallow) but there are many others who are certainly way above his pay grade.

SPEAK only when you feel that your words are better than your SILENCE, and that mowaten in Farsi means Zip it.

That's nice, but the reality is that Syria will never go back to what it was. The regime will never get it all back.

Now let its original inhabitant return. But there's one thing that this article omitted, a fact that some already know, that Syrian Christians are now engaged in fighting alongside Regime forces, so not all credits should go to the regime, but also for these brave people who have taken their courage with both hands and are fighting to return what is theirs. let our church bells ring high for Good Friday and Easter, Christ is risen, Maaloula is risen.

True but it's a team effort right? I mean without Assad help this wouldn't happen. Too bad Assad doesn't have love for Lebanese Christians.

This is why can't get along with some Syrians because they deny any crimes Assad has committed against Lebanese especially Christians. You know I support the Syrian Christians against their slaughter. However, I understand my LF friends point of view when they say where were the millions of strain Christians when we were getting slaughtered by Assad? I understand this point but am still thrilled Maaloula is free.

YES .ultrahabib...and aligned themselves with Israel...

Yes Zahle, I agree, it is team work for sure, but I am also trilled to see Maaloula freed from the clutches of the Takfiris. In fact, there are now many Syrian Christian , militias wearing regular army attire that have formed and have decided NOT to sit and get slaughtered. NB: Here we are focusing purely on the Syrian context and I look forward to see TVs cover the masses of Good Friday and Easter in Maaloula, and in the original language of Christ (yetmajjad esmak ya Yesou3). May also the clerics be freed.

Phoenix my friend, don't listen to the takfiri bloodlusters. You are right that the Christian people of Maloula has the right to live without oppression. The christians of Syria are very close to the government and Resistance forces, because we are all targeted for extermination, all minorities are. I hope all Christians in Lebanon will take example of their brothers in Syria, let go off Geagea,Israel and USAs games. Move closer to Russia for instance. The west doesn't care about you Phoenix, all they see you as, are collateral damages.

what is soooo happy about this news? oh! of course, each time the syrian regime wins a battle M8ers have a hard on... so proud that this very same regime killed thousands of lebanese.... i bet they also had hard ons when the assad regime killed lebanese, as faithful collaborators they were and even thankful for it!

personnally i do not care... i only await the day this evil regime will be down, no matter how , as long as this regime that harmed thousands of lebanese gets the same fate as saddam hussein or moubarrak or khadaffi!

unlike M8ers traitors, i still think of the tortures killings kidnappings stealing this regime brought to lebanon... i do not suffer from alzheimer like those low traitors.....

Only Zionists want their annihilation

zionists have a lot more honour than arabs

yea, according to a zionist. lol

i guess the saudi linked wahabis are going to have to celebrate easter in a different part of syria.
takbeer

They will celebrate with the liar Bani Maarouf, in the Shouf.

maloula nuns as well wont celebrate in maloula, coz under house arrest...

phoenix you seem to me like typical LF looser .

The majority of these Wahabis are his Syrian citizens. Assad NEEDS to reach out to the Sunni majority who (most) do not support the armed Takfiri opposition, but are also opposed to his rule. He needs to stop his uncaring arrogant attitude toward the Islamist opposition. Also, he needs to free leftists from his jails who ARE NOT TAKFIRIS and were not involved in violence.

true, but he also needs to step down and handle power otherwise this war will last years....he cannot be credible anymore in front of the people he massacred.

22 minutes ago OTV: The reporter Hamza al-Hajj Hassan and three other al-Manar journalists were killed in Maalula.

Finally, I got an in-house full TV crew.

Actually, it seems there has been over a 100 dead from hizbushaitan just the past few days

lol, must be ten million casualties from HA in the last year, according to your count :)

Actually, I have been busy this past week. They are coming in by the truckloads.

Good to see the FSA-Al Qaeda jihadist terrorists driven out.

Morpheus you can can put your 5alifah desires in the ashes, Maloula have every right to resist takfirism. These takfiris entered the ancient city just to massacre everyone inside.

Who here is smart enough to realize that, currently, there is no legitimate rebellion in Syria having its spirit, which existed for a short time, undermined and hijacked by religious extremists. Funny, these grieving Syrians did not complaint during Syria's 30-year hegemony over Lebanon. After exiting Lebanon, couples with the drought the Syrians were facing, did it really become a true rebellion?