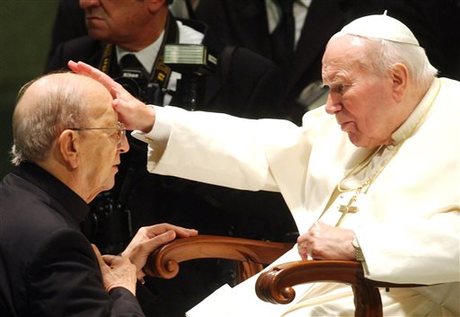 Pope John Paul II is rightly credited with having helped bring down communism, of inspiring a new generation of Catholics with a globe-trotting papacy and of explaining church teaching on a range of hot-button issues as Christianity entered its third millennium.

But the sexual abuse scandal that festered under his watch remains a stain on his legacy.

John Paul and his top advisers failed to grasp the severity of the abuse problem until very late in his 26-year papacy, even though U.S. bishops had been petitioning the Holy See since the late-1980s for a faster way to defrock pedophile priests.

The experience of John Paul in Poland under communist and Nazi rule, where innocent priests were often discredited by trumped-up accusations, is believed to have influenced his general defensiveness of the clergy. The exodus of clergy after the turbulent 1960s similarly made him want to hold onto the priests he still had.

Pope Francis has inherited John Paul's most notorious failure on the sex abuse front — the Legion of Christ order that John Paul and his top advisers held up as a model. Francis, who will canonize John Paul on Sunday, must decide whether to sign off on the Vatican's three-year reform project, imposed after the Legion admitted that its late founder sexually abused his seminarians and fathered three children.

Yet the Legion's 2009 admission about the Rev. Marcial Maciel's double life was by no means news to the Vatican.

Documents from the archives of the Vatican's then-Sacred Congregation for Religious show how a succession of papacies — including that of John XXIII, also to be canonized Sunday — simply turned a blind eye to credible reports that Maciel was a con artist, drug addict, pedophile and religious fraud.

By 1948, seven years after Maciel founded the order, the Holy See had documents from Vatican-appointed envoys and bishops in Mexico and Spain questioning the legitimacy of Maciel's ordination (by his uncle, after Maciel was expelled by a series of seminaries), noting the questionable legal foundation of his order and flagging his "totalitarian" behavior and spiritual violations of his young seminarians.

The documents show the Holy See was well aware of Maciel's drug abuse, sexual abuse and financial improprieties as early as 1956, when it ordered an initial investigation and suspended him for two years to kick a morphine habit.

Yet for decades, thanks to Maciel's ability to keep his own priests quiet, his foresight to place trusted Legion priests in key Vatican offices and his careful cultivation of Vatican cardinals, Mexican bishops and wealthy, powerful lay Catholics, Rome looked the other way. Vatican officials were impressed instead by the orthodoxy of his priests and Maciel's ability to attract new vocations and donations.

John Paul, who in 1994 praised Maciel as an "efficacious guide to youth," wasn't alone in being duped. His top advisers were some of Maciel's fiercest supporters, convinced that the accusations against him were the typical "calumnies" hurled at the greatest of saints. They were swayed instead by numerous testimonies from bishops and others of his greatness — documentation which also features in the Vatican archives.

Two years after the Vatican sentenced Maciel to a lifetime of penance and prayer for sexually abusing his seminarians, John Paul's No. 2, Cardinal Angelo Sodano, in 2008 was still praising the spirit of Maciel and his "humility" in stepping aside after the Vatican finally confronted him with the accusations.

John Paul's prefect of the Congregation for Religious, Cardinal Franc Rode, told Legion priests that same year he had absolved Maciel and praised the good "fruits" that Maciel's Legion had given the church.

"The fruit is good. The fruit is extraordinarily good. It is excellent," Rode said, according to his November 2008 speech made public online by Mexico's El Zocalo newspaper. "Can we say the tree is bad then? Purely from a logical standpoint, I would say no. I absolve Father Maciel. I do not judge him."

Maciel's fraud, one of the greatest scandals of the 20th-century Catholic Church, raises uncomfortable questions for today's Vatican about how so many people could have been duped for so long. It also brings into question how the church's own structure, values and priorities enabled a cult-like order to grow from within and how far accountability for all the harm done should go.

Finally, it begs the question of whether the order has really been purged of the abuses that allowed generations of priests to subject themselves to blind obedience to a false prophet.

In his 2013 book "I Lived With a Saint," John Paul's longtime Polish aide, Cardinal Stanislaw Dziwisz, said his pope knew "nothing, absolutely nothing" about Maciel's misdeeds.

"For him, he was still the founder of a great religious order and that's it. No one had told him anything, not even about the rumors going around," wrote Dziwisz, the leading force behind John Paul's remarkably fast canonization.

He blamed the Vatican's "extremely bureaucratic structure" for preventing such information from reaching John Paul and denied that his pope was slow to react to the abuse scandal.

Vaca was the Legion's superior in the U.S. from 1971-1976, when he left the order and joined the diocese of Rockville Center, New York. In 1979, a year after John Paul was elected, Vaca's bishop sent the Congregation for Religious a bombshell set of documents in which Vaca and another ex-Legion priest detailed the sexual abuse they and some 19 other priests and seminarians had endured at Maciel's hands.

He later was one of a half-dozen former Legionaries who brought a canonical case against Maciel at the Vatican in 1998. It took eight years — and the death of John Paul — for Pope Benedict XVI to sanction Maciel.

"I feel once more outraged, furious with feelings of deception and rebellion at the circus process to make 'saint' a pope who did nothing to preserve the Catholic Church and society from the horrendous crisis inflicted upon them by the Catholic clergy sexual abuse," Vaca told The Associated Press in an email.

Vaca questioned why Francis was "following the same dubious decision — initiated by Benedict XVI — to make a saint with such an urgency a personality who was involved either in a voluntary complicity or in responsible ignorance in reference to Maciel."