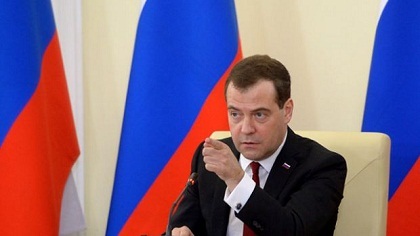 Russia is ready to face a new round of Western sanctions over Ukraine, Prime Minister Dmitry Medvedev said Tuesday.

"I am sure we will be able to minimize their consequences," he said in a televised speech to parliament.

"The government is ready to act in conditions when the priority of our work becomes protecting the economy and citizens from such unfriendly acts that could follow due to the escalating foreign policy situation."

However, he acknowledged Russia's economy was facing an "unprecedented challenge".

Russia views sanctions as a "road to nowhere," Medvedev said, while insisting that the country was ready to function in isolation if necessary.

"We can of course keep on exchanging blacklists. But I don't even consider it necessary to prove from this podium that it's an absolute dead-end," he said.

"Any restrictions that are imposed on us are a primitive route. This is a road that leads nowhere, but if a number of our Western partners go along it all the same, we won't have any choice.

"Then we will manage using our own resources and we will win in the final account," he said to applause from lawmakers.