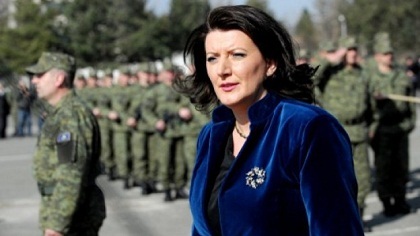 Kosovo's president on Thursday called snap elections for June 8 after lawmakers failed to agree on the creation of an army for the former Serbian province.

"I intend to ask from the European Union, in the coming days, to send a mission of observers to closely monitor the electoral process," said President Atifete Jahjaga as she announced the election.

Prime Minister Hashim Thaci had called on Tuesday for an early poll after his plans to create a 5,000-strong army to "protect the sovereignty" of Kosovo were blocked in parliament.

Since the end of the 1998-1999 war between ethnic Albanian separatists and Serbian forces, NATO has been in charge of maintaining peace and security in Kosovo.

Kosovo unilaterally proclaimed independence from Serbia in February 2008. It currently has only the Kosovo Police Service, a civil emergency force created with NATO assistance in 2009.

The plan to create an army met strong opposition from Kosovo's Serb minority, which numbers around 100,000 in a population of 1.8 million. They feared it would not be impartial in the still ethnically-tense territory.

The constitution requires the approval of two-thirds of lawmakers, as well as two-thirds of ethnic minority deputies, for major decisions.

Parliament has also been disrupted by ongoing disagreements over Serb demands for a guaranteed number of MPs in future elections.

On Wednesday, parliament voted to dissolve itself paving the way for the early elections.

Thaci's Democratic Party of Kosovo (PDK) won the most of the votes in 2010 elections, but with only 33 MPs in the 120-seat parliament, it had to join forces with several smaller parties to form a government.