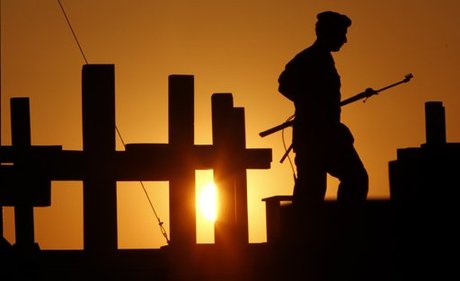 Turkey's military on Thursday confirmed its warplanes has pounded Kurdish rebel targets during cross-border raids into northern Iraq and vowed to continue the "actions" until the guerrilla group is "rendered ineffective."

A military statement said the jets hit 60 suspected rebel targets on the mountainous region near the border with Turkey late Wednesday as well as targets on Mt Qandil, along the Iraqi-Iranian border, where the leaders of the rebel group Kurdistan Workers' Party, or PKK, are believed to be hiding.

Turkish and Kurdish media had reported that Turkey sent jets into northern Iraq Wednesday, hours after eight soldiers and a village guard were killed in an ambush by the autonomy-seeking guerrillas on a road near the border with Iraq. Officials did not confirm the raids until Thursday.

Many PKK guerrillas shelter in the mountains of neighboring Iraq, crossing the border for hit-and-run assaults. The group is considered a terrorist organization by both the European Union and United States.

"The Turkish Armed Forces will continue with similar actions inside and outside of Turkey with determination, until the north of Iraq becomes a secure, livable area and the separatist organization which uses it as a base for attacks on Turkey is rendered ineffective," the military said.

The military said Turkish forces also fired 168 rounds of artillery fire on suspected PKK targets, adding that the military targeted rebel bases only and showed "the necessary sensitivity" not to harm civilians.

Close to 40 Turkish soldiers have been killed in stepped up PKK attacks in July. Prime Minister Recep Tayyip Erdogan had hinted at a major operation against the rebels, saying Turkey had reached the end of its tether.