What's The Age of The Moon? It Could be Waning 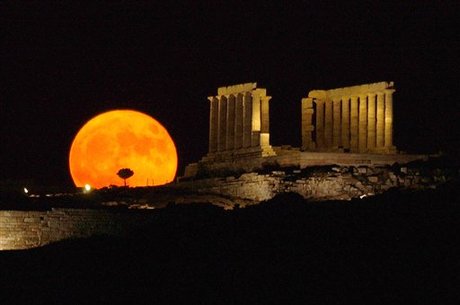 hat old moon might not be as antique as once thought, some scientist think. They say it is possible that it is not a day over 4.4 billion years old.

But other astronomers disagree with a new study's conclusions. They think the moon is up to its typical age-defying tricks and is really pushing 4.6 billion as they have suspected all these years.

Either way, the new analysis of an important moon rock brought back by the Apollo 16 mission is showing that the moon is not ready to give up its true age and origins quite yet, even though scientists thought they had it figured out a decade or two ago.

"It's not as ancient as we might think," said study chief author Lars Borg, a geochemist at the Lawrence Livermore National Lab. His study appears online Wednesday in the journal Nature.

The study uses new techniques and radioactive isotopes of lead and other elements to date the moon rock at 4.4 billion years old. What is key is that this is a special type of rock that would have floated up to the moon's crust soon after its theorized ocean of molten rock cooled. That supposedly happened soon after the moon formed as a result of a spectacular crash between Earth and a planet. The chunks that broke off formed the moon.

That means there are two possibilities, Borg said. Either the moon is 200 million years younger or the accepted theory of a molten rock ocean on the moon is wrong, he said.

Borg acknowledges that some moon rocks have been dated at nearly 4.6 billion years old. But those conclusions could be wrong because of weaker rock dating techniques used in the past, he said.

Outside scientists said Borg did good work coming up with a date for the Apollo 16 rock but may have jumped to the wrong conclusion on lunar age or origins. They said it's possible that the rock is from a smaller molten rock ocean or was created when the moon was bombarded by space debris which was much more common a few billion years ago.

Borg's conclusion "is a little bit fancy for my taste," said Erik Asphaug of University of California, Santa Cruz, who recently published a theory that Earth used to have a second smaller moon until it crashed into the bigger one.