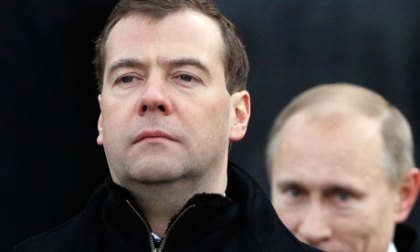 Russia and Western powers are on the brink of a new Cold War over the crisis in Ukraine, Russian Prime Minister Dmitry Medvedev said in an interview broadcast Tuesday.

"Basically we are slowly but surely approaching a second Cold War that nobody needs," Medvedev said in an interview with Bloomberg Television that was also published on the Russian government's website.

The Russian premier slammed U.S. President Barack Obama's response to the Ukraine crisis, saying he regretted that Washington had undone years of work in improving relations during the "reset" between the two countries.

"I believe President Obama could be more tactful politically in discussing those issues," Medvedev said in the interview recorded Monday in his country residence.

"The agreements that were reached with America were useful. I am very sorry that everything that has been achieved is now being eliminated by those decisions."

He said that Russia had "not commented on (sanctions) a great deal or responded to them harshly although we probably could cause some unpleasantness for the countries that are imposing those sanctions."

Russia is set to sign a major gas agreement with China as President Vladimir Putin pays an official visit to Beijing, Medvedev said, adding that it would be possible for Russia to divert all its gas intended for Europe to China.

"It's time that we reached an agreement with the Chinese on this issue," Medvedev said, adding: "It is very likely there will be a contract, which means long-term contracts."

The gas deal is crucial for Moscow as its relations with the European Union and the United States plunge to post-Soviet lows over the crisis in Ukraine.

Chinese President Xi Jinping and Putin on Tuesday pledged to build ties and the official Xinhua news agency reported they signed a "large" number of agreements.

The European Union is seeking to cut its reliance on Russian gas, with nearly 15 percent of the Russian gas it consumes transiting Ukraine, but Medvedev said he believed Western Europe had no real option but to consume Russian gas.

"So far there is no viable alternative in sight to Russian supplies," Medvedev said.

He said that it would be possible in a "worst-case scenario" for Russia to divert its gas supplies from Europe to China.

"If we look at the worst-case scenario purely theoretically, any undelivered European gas supplies can be sent to China by the eastern route," Medvedev said.

Russia however has "enough capacity and enough gas to send supplies both the eastern and the western routes," Medvedev said.