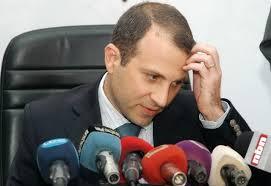 Foreign Minister Jebran Bassil noted on Wednesday that Lebanon has suffered the most from the repercussions of the Syrian crisis, most notably with the flow of refugees.

He said during the 17th meeting of the Non-Aligned Movement in Algeria: “Lebanon's existence and identity are at risk as a result of the influx of refugees.”

“Lebanon has showed unprecedented hospitality towards the displaced,” he added.

This support has only been met with empty promises from the international community that said it would assist Lebanon in its mission, continued Bassil.

The large number of refugees has prompted the government to implement a plan to halt their flow and return them to Syria, explained the minister.

The remaining displaced will be harbored at housing zones within Syria or near the Lebanese-Syrian border, he stated.

The government on Friday formed a ministerial cell to follow up on the refugees' conditions and adopt procedures to deal with the influx of Syrians in cooperation with concerned administrative bodies.

The Foreign Ministry was also tasked with seeking to establish safe refugee camps inside Syria or in the border region between both countries, in cooperation with concerned parties.

The UNHCR's periodic report revealed on Monday that the number of Syrians who fled the war-torn neighboring country has reached 1,058,088, in addition to 11,000 who crossed into the country in the past week.

The United Nations has called for gathering USD 1,89 billion to support Lebanon in dealing with the refugee crisis in 2014, but has only received USD 242 million of the total amount.

The identity of Metn, Keserwan, Jbeil and Jezzine is also at risk by Hezbollah's settlers, they already changed the identity of Haret Hreik, Chiyyah, Hadath...

basil is scared that already sunnis outnumber shia by more than double with the Palestinians and Syrians that found refuge in Lebanon.
he is correct in being afraid because the civil war is coming fast, and his hizbushaitan will be kicked out and he will lose his masters.

Agree 100 and a simple question the people running away from the tyrant should be expelled? Or these thugs supporting the regime and still come here for no reason?

@Bassil : Lebanon's existence is threatened by Bachar el Assad and Hassan Nasrallah. Syrian refugees are an unfortunate collateral damage of the criminals and terrorists you support !

@Bassil : focus on filing a complaint about Syrian Government bombings and aggressions and doing your job ! You failed to do so with over 100 such Syrian aggression in the past year. You are a traitor. You will be dealt with as a traitor ...

@Roar : I don't know who lies more, You or Nasrallah.

Please backup your BS : Give me evidence of any M14 politician supporting takfiris.

Suleiman ORDERED Bassil to file a complaint at least 5 times. He did not do it. Tell me why ?

The Lebanese army is perfectly capable of handling the border in and around Arsal and it has proved it in so many occasions.

Syrian bombings are unacceptable. Any support for such bombings is similar to supporting Israel bombing Lebanon. TRAITOR that is !

@Roar ... i'm asking you who supplied milk and blankets to "takfiris". Yalla, show me evidence or shove it.

And by definition, Hezbollah is Takfiri so pick your words right.

it seems everything is a game to you: how old are you? 5 years old?

this is the problem with you guys: you do not realize you are destroying this country. you think it is a game.

it seems everything is a game to you: how old are you? 5 years old?

this is the problem with you guys: you do not realize you are destroying this country. you think it is a game.

oldest trick in the book : divertion, blame the refugees/foreigners for masking Aoun blocking the elections...

who refused to set up camps in Lebanon? who pretended they would be turned into training camps if any camps were set up?
LOL

Having done it in lebanon, Jumby understood it long time ago...

Roar
I fully agree with you. I have been advocating for a long time now that Lebanese living in Lebanon must leave the country and all Lebanese overseas to come back home and rebuilt the state
in my humble opinion it is the only way to salvage the country

It took you quite a while to spit it out honorable minister, but I honestly don't know how this position of yours, which is most commendable will sit with your father-in-law? Now you've got your job clearly cut out for you, now you must make good on your position in this summit, to come back home and push for the Syrian and Palestinian refugees to start going back home. It's in your hands now, so please do it, and do it without accusing anyone either, remember, your a FM for all Lebanon, not just the FPM or Hezbollah, right? Yalla, get started.

We are doing a good job of helping the refugees and we will continue to do all we can. This government is constructive and proposing new solutions and Bassil is part of this effort government.

We welcome those who flee war, and seek peace here, and we remember our own exile because of war...

Lebanon will always be a safe haven.

This forum, unfortunately, mostly voices those who hate, speak doom and destruction and wish harm on others. But the majority of the Lebanese have learnt from their mistakes.

lebanons existance is only threatened by your Aouncle's endless stupidity!
and we added your sheer ignorance... what a blowing mix!

I don´t understand why the christian´s just doesn´t stand up for their country and kick out the syrians, Aoun and Hezbollah!!! You´ve already tried to solve the problems by turning your other cheek, but insstead of doing the same, those war-damaged criminals slap you on your other cheek. You can´t be non-violent with violent people, cause you´ll end up dead, or being their slave.