Obama Warns U.S. Must Not Rush to War 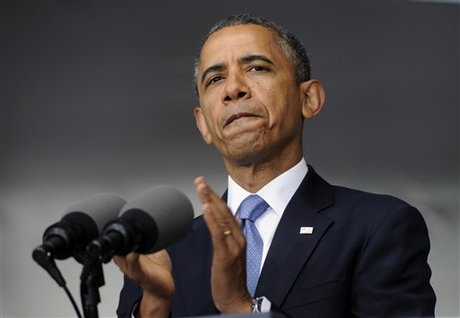 President Barack Obama mounted a defiant defense of his global leadership Wednesday, rebuking critics who see him as weak but warning that not every global threat justifies a U.S. military response.

In a major speech at the West Point military academy, Obama denied U.S. power had ebbed under his watch, after he withdrew troops from Iraq and as he does the same in Afghanistan.

He also pledged to ramp up support for Syrian rebels, vowed to stand up to Russia over Ukraine and promised to make drone strikes against terror suspects more transparent.

He vowed to hold China accountable to international "rules of the road" in the South China Sea and elsewhere.

"To say that we have an interest in pursuing peace and freedom beyond our borders is not to say that every problem has a military solution," Obama said.

"Since World War II, some of our most costly mistakes came not from our restraint, but from our willingness to rush into military adventures -- without thinking through the consequences," Obama said, in an apparent reference to the Iraq war, which he has branded a disaster.

The president's speech came with his foreign policy, which was once seen as a political asset, under assault from critics who believe he is being outmaneuvered by strongmen like Russian President Vladimir Putin and China's President Xi Jinping.

"Here's my bottom line: America must always lead on the world stage. If we don't, no one else will. The military ... is, and always will be, the backbone of that leadership."

Obama was particularly exercised by those who complain he should have deployed the U.S. military in Syria or made a more robust strategic response to Russia's annexation of Ukraine, or who complain that he has left Iraq or Afghanistan to fend for themselves.

"But U.S. military action cannot be the only, or even primary, component of our leadership in every instance.

"Just because we have the best hammer does not mean that every problem is a nail," Obama told a graduation ceremony at the college.

"And because the costs associated with military action are so high, you should expect every civilian leader – and especially your commander in chief – to be clear about how that awesome power should be used."

Obama said he was "haunted" by the deaths of American servicemen under his watch -- including some who attended previous commencement ceremonies he had given at West Point.

Obama also made an implicit defense of his decision to call off military strikes on Syria at the last minute last year to punish chemical weapons strikes.

Critics at home and abroad warned that the decision left dangerous questions about whether Washington would stand up to "red lines" elsewhere in the world.

He also defended his decision to leave nearly 10,000 troops in Afghanistan for a year after combat troops leave at the end of this year, and to gradually reduce the presence to a detachment of troops at the U.S. embassy in Kabul by the end of 2016, just before he leaves office.

Meanwhile, Obama also warned that the United States was ready to respond to China's "aggression" but said that Washington should lead by example by ratifying a key treaty.

Obama said that the United States should shun isolationism and that its military must be prepared for crises.

"Regional aggression that goes unchecked -- whether it's southern Ukraine, or the South China Sea, or anywhere else in the world -- will ultimately impact our allies, and could draw in our military," Obama said.

But Obama emphasized caution on any decision to use force and said: "American influence is always stronger when we lead by example."

"We can't try to resolve the problems in the South China Sea when we have refused to make sure that the Law of the Sea Convention is ratified by the United States -- despite the fact that our top military leaders say that the treaty advances our national security," Obama said, not naming China directly as he diverted from his prepared text.

Senators of the rival Republican Party have refused to ratify the treaty, saying that the U.N. convention would override U.S. sovereignty.

Tensions have been rising for months between China and its neighbors at sea, with Vietnam on Tuesday accusing Beijing of ramming and sinking one of its fishing boats in the South China Sea.

Japan and the Philippines also have tense disputes at sea with China. Japanese commentators have voiced concern that the U.S. failure to prevent Russia from annexing Ukraine's Crimea peninsula in March sent the wrong signal to China.

In another reference to policy toward Asia, Obama again cited the democratic reforms in Myanmar as a success story.

The administration upon entering office in 2009 opened a dialogue with the then military-ruled nation earlier known as Burma, whose relations have improved with the United States have improved dramatically.

"Progress there could be reversed. But if Burma succeeds, we will have gained a new partner without having fired a shot," Obama said.

"America must always lead on the world stage. If we don't, no one else will. The military is, and always will be, the backbone of that leadership"

lol he really is no different than bush, thinking he was sent by god to "lead" (read: rule) the world at gunpoint

Not the first time they gave salafis training and weapons. Let's see how it works out this time. Game changer right, let's see about that.

i didnt, but nothing new there, and who cares? they will send more mercenaries and brainwashed takfiris and the SAA will continue crushing them. there are millions of syrians ready to defend their country, and with each passing day they get more and more determined and experienced in pest control.

you're so touchy about your president, you cant see how wrong his ideology is. you're a desperate case anonyme, with each passing day you get more deluded and fanatical.

tell us ya mooowaten how is bashar or khamenei any better leaders? LOL
as you seem to give them as examples to follow!
at least in the USA the president changes, but in the regimes you support people have NO voice at it or they get killed! LOL

oh! but yes you prefer dictatorship so no wonder you demonize democracies... typical trait of fanatics...

I rather if Iran leads the world.

obama is a puppet, he will get replaced by another, but the true holders of power remain and will continue to dictate american policy. the corporations, the rulers of finances, the military industry, the lobbies... are they elected? right

then why is it better in iran or syria ya puppet moooowaten? LOL no lobbies? no extragovernmental interests? no religious interests?where do you live? on Mars? LOL

America may lead the World but democratically, working for peace and development in the whole world. American should involve to settle the international disputes peacefully and work for poor of the world, health & education.

A very desperate speech. This are the good days people been waiting for, in years. The Fall of the US war Machine, it doesn't matter who is President in the US. They all follow the same agenda, Obama just got the seat when all their banks got empty, very unlucky.

Long time no see..
But i couldn't help myself noticing u are tense... Back to some logic:
War is a resource of money for the US as for most of countries selling arms so ur talk about bankrupcy is near to nonsence...

For takfiri part, again... Assad released more than 500 well known takfiri (like chaker el absi and co) at the begening of the uprising, he used the videos taken in lebanon to show takfiri atrocities (and this is also known) he did everything to make the equation: me or the takfiri (even buying petrol from da3ech from der el zour while bombing fsa in halab/hama...) and i have to say he succeded in making the europeen/west be afraid..
But for us who lives here, who know these facts (even u know them) the guy is over, and a guy who willingly promote extremesim to stay in power deserve no less than being hanged in damscus as an exemple for the one who will follow...(even if i'm against death penalty..)
This said, take it easy mystic, relax and go have some chupachups man....

yawn.. that old propaganda again? it's been debunked a thousand times. at the beggining of the protests, before they turned violent, assad released about 180 islamists in a bid to ease tensions, so what? did he also arm them and tell them to kill thousands of his soldiers? did he give them TOWs to blow up his own tanks? did he give them knives to cut the throats of his supporters?
get a break from that captagon, you're losing it.

U r right mowaten assad would never do such cruel things...
He is so sweet..
Sorry man, i made u go mad, now u too, chupachups..

Yes long live very socialist putin, very democratic china, very secular iran and of course very human assad...so different and better fron neo-nazy europeen, imperialist west.. Indeed
And of course labayka ya nasroulah...
Now that u are so exited of the new world order southern, take it easy, have a break and u to go have some chupachups man...

don't worry, history take care of dictators and their end is a question of time and their supporters will vanish quickly!

sure anonyme! before the hegemony of hezbollah the majority of people in the South were communists , enjoyed parties, wore mini skirts... now? just look at the culture of death and sorrow they have brainwashed people with...
sure the iranian imperialism to those people is a good thing! LOL

Most of you people are week and have no backbone, and this is why you've allowed your Wattan to be rapped.

this guy knows what hes doing. The presidents before him invaded and smashed all governments and their structure as well as any national discipline so he knows that an American silence is better than an American intervention which means once America is out of these smashed countries their rehabilitation would be impossible in the near future and chaos will prevail thus the American interests = oil and gaz will not be gone but the Big Sisters the companies of oil and Gaz will loot everything while people are busy killing one another and changing from system to another.