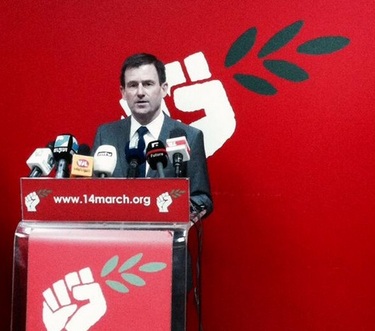 United States Ambassador to Lebanon David Hale stressed on Monday the need for Lebanese powers to elect a new president, urging parliament to do so soon.

He said: “Only with a fully functioning presidency, parliament, and government will Lebanon be able to address effectively, with international support, the challenges it faces.

He made his remarks after holding talks with March 14 General Secretariat coordinator Fares Soaid.

“This was an opportunity for me to offer reassurance that the United States remains committed to the foundations of our policy toward Lebanon: support for full implementation of the Taef Accord, U.N. Security Council Resolutions 1701 and 1559, and the Baabda Declaration, as well as support for the work of the Special Tribunal for Lebanon,” added Hale.

“These provide the ingredients for the stability of Lebanon. We stand with all Lebanese who seek to fulfill the obligations related to these pillars,” he stressed.

“However, a prolonged presidential vacancy threatens Lebanon’s stability,” he warned.

“It is for the Lebanese to elect a Lebanese president, but we urge parliament to do so soon,” he noted.

“Meanwhile, the United States will remain a strong and engaged partner with the Lebanese people and institutions of the state,” he continued.

The recent visits by Secretary of State John Kerry and U.S. Central Command Commander General Lloyd James Austin are the latest demonstration of this commitment, he said.

“To date, the United States has delivered the largest contributions both to Lebanon’s security services as well as to humanitarian relief agencies aiding in your response to the spillover from the Syrian conflict,” Hale continued.

“We are encouraged by evidence that other states are increasing their support for Lebanon as well, and look forward to next week’s conference in Rome in support of the Lebanese army,” he added.

Commenting on Hizbullah's involvement in the fighting in Syria, he stated: “Nothing has changed in our policy toward Hizbullah, a designated Foreign Terrorist Organization which is playing a destructive role in Syria.”

“By sending fighters into Syria, Hizbullah has violated its own commitment to the Baabda Declaration and Lebanon’s policy of dissociation from the Syrian conflict,” he remarked.

“Hizbullah should withdraw its fighters from Syria immediately,” demanded Hale.

“They are only perpetuating the Syrian regime’s brutality against its own people, drawing extremists into the region and Lebanon, and contributing to the insecurity that is driving refugees to seek shelter in Lebanon,” he noted.

“Those who have influence with the Syrian regime need to use it to move the regime toward a negotiated political solution, not to cause more bloodshed and participate in the regime’s campaign against its own people,” said the U.S. ambassador.