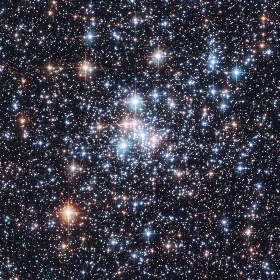 Australian scientists gazing billions of years back in time with powerful radio telescopes on Monday warned that the universe's lights -- the stars -- were quite literally running out of gas.

Robert Braun, astronomy and space chief at Australia's government science agency CSIRO, said about one-third of the molecular gas vital for the formation of new stars had been used up and the skies were slowly dimming.

Braun's team mapped the light densities of galaxies about five billion light years from Earth and compared them with today's "local universe" to see how much gas they contained and rates at which new stars were born.

"We've seen a decline in the amount of stars being formed by more than a factor of 10, probably closer to 20 or even 30," said Braun of his research, due to be published in the Monthly Notices of the Royal Astronomical Society.

"It turns out that these galaxies actually had 10 times more gas with which to form the stars than they do today. We just aren't seeing as much gas fall in to form the new stars," he told Agence France Presse.

The key to the dwindling number of stars was a shift in the universe's dominant forces about eight billion years ago -- the reasons for which remain a mystery -- which saw gravity overtaken by dark energy.

Essentially gravity's opposite, the repulsive force has seen the universe expand at exponential speeds in the past few billion years, pushing galaxies further from the "intergalactic medium" where they can refuel on gas.

"Gravity attracts but this dark energy, it seems, is a repulsive force so that things are flying apart at an ever-increasing rate," Braun told AFP.

"The gas that was once within reach can no longer be pulled in and as such the star formation rate is declining rapidly and will continue to decline into the future."

The growing darkness was so incremental Braun said it would be impossible to notice in a human lifetime, but were someone to live for one billion years they would "see things changing very dramatically" in the skies above.

Without a reversal in the universe's dark energy-fuelled expansion -- the likelihood of which remains a great scientific puzzle -- Earth's inhabitants would very slowly but surely inch toward nights of deep darkness, he added.

The gas mapping work was started by French astronomer Francoise Combes some years ago at the Institut de Radioastronomie Millimetrique (IRAM), and Braun said Combes -- now at the Observatoire de Paris -- collaborated on his study.