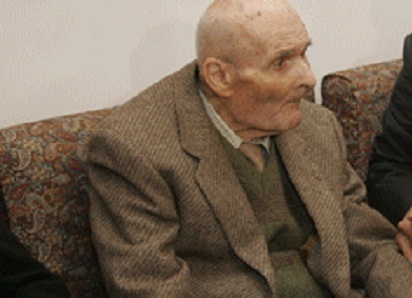 Geagea, the father, was around 92 years old and he was suffering from health complications related to aging in the past months, LF sources told Naharnet.

"He spent the last three months of his life at the hospital,” the sources said.

The LF leader revealed last month in an interview on LBCI television that his father had served in the Lebanese Army band.

"My father did not encourage me to join the military institution, although he was himself a member. And then I decided to enter the medical field,” Geagea commented.

The LF media office announced that Farid Geagea's funeral will be held on Thursday at 5 pm at the St. Saba church in the northern city of Bsharri, his hometown.

Condolences will also be received on Friday at the same church, and on Saturday and Sunday at the LF headquarters in Maarab from 11 am to 7 pm.

While his son is a mass murderer, this man is not responsible for his son's countless crimes. RIP.

His son was a drunk killed in a Bar fight ! They made it look like he was martyred in Israel because Alcohol is "Haram" and named a street after him. They also reenact his brave battle and martyrdom against Israel ... i mean against another drunk !

Sad to see old people passing away knowing they have left their sons and grandsons in a country tormented by war and corruption, I hope our generation can one day find a way to go past our differences and maybe build a better future for our kids. May Farid rest in peace, and all other old people passing away in this forsaken country.

RIP Farid Geagea. You had given the true lebanese and the christian resistance the best gift anyone can ask for and that is the leader of the christians: Dr Sami Geagea

I had been to Mr Farid Geagea house. Very simple and Mr and Mrs Geagea were down to earth

JP I too know this family and am sadden by their loss. As PB put it this was one point that weighed heavily on many of our elderly the regret of not seeing their beloved Libnan at its full potential and it's sons and daughters fulfill their dreams. RIP FARID GOD BLESS.

Can't agree more with you forces. Its really sad but we can't give up. Not after all the sacrifices we did and the new generation is doing now.

The sins of the father do not pass on to the son...and vise versa R.I.P. condolences to the entire Geagea family.

Resistance sir every single political figure in Lebanon has sinned, whether you like it or not. Let's transcend over all this hate and just offer condolences unconditionally. We are Lebanese, we all want this country to prosper, we all want our children to be proud and safe. Let us for once be one people where religion is left in the church and the mosque, let's be a nation under a strong army that protects all of us against all enemies of Lebanon starting with the biggest evil that is Israel and every other sectarian extremist.

PB I respect your statement and hope and truly wish for the same...with that being said What the heck did i say that is disagreement with what u said??!! lol no worries have a good day brother

Nothing at all buddy, I misread a word, my apologies, wasn't attacking in any way :) Have a good day as well brother

Hello, i think that i saw you visited my weblog thus i came to “return the favor”.I'm trying to find things to improve my web site!I suppose its ok to use
a few of your ideas!!

My sincere condolences with the passing of your father. May time heal the wound and may you have good memories to sustain you.

RIP. Im glad that he lived to see his son getting released from jail. Either they all go to jail, or none of them.

Samir khara is a murderer. He is not a patriot. He worked with Israeli intelgince. Very very dirty pathetic loser. Can't fight men. He is a coward. He killed innocent women & children in shatila camps. He killed respected lebanese leaders in a cowardly way. All his life he has been a coward. He looks like a Sheitan kelb. Keep bidding in your house coward. As for his dad. Fuck that bastard fir bringing up a shit son like that. Hope your son joins you. Aoun is the only real patriotic Christian who fought like a man and always had honor. He is what Lebanon needs. We don't need a pink low life like Geagea. Who even let this clown back out on the streets. The guts this fag has to say Sayed Hassan Nassrallah name from his nasty mouth. Plz grow balls and leave your charity house people gave you. So you can get slapped like bitch. Ohhhh forgot to mention your wife's a whore. She fucked half of Lebanon while you were sleeping on the floor in jail.