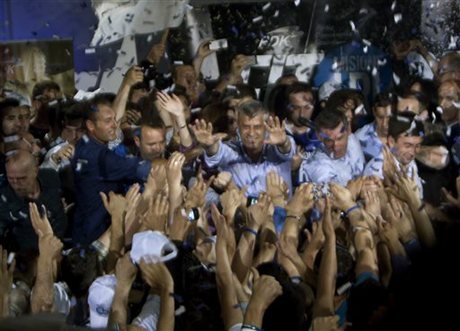 Three Kosovo opposition parties said Tuesday they have united to seek to form a new government in a bid to prevent Prime Minister Hashim Thaci from getting a third mandate after a snap election.

The three parties -- the Democratic League of Kosovo (LDK), the Alliance for the Future of Kosovo (AAK) and the Initiative for Kosovo -- said in a joint statement they wanted to give the tiny country a "government of hope."

However, following Sunday's snap parliamentary polls, won by Thaci's Democratic Party of Kosovo (PDK), the three opposition parties do not have the necessary majority of 61 MPs in the 120-member parliament to form a government.

According to results based on more than 94 percent of votes counted, they will have some 40 MPs in the new parliament.

Thaci's PDK won 35 seats, which is also not enough to rule alone. It was followed by the main opposition LDK and the nationalist Self-Determination movement which won 30 and 15 seats, respectively.

The new opposition alliance has named Ramush Haradinaj, a former guerilla leader and head of the AAK party, as their nominee for prime minister.

Once Thaci's brother-in-arms, Haradinaj was briefly prime minister but stepped down in 2005 after he was indicted by a U.N. war crimes court. He was acquitted in 2012.

The alliance will need the backing of minorities who have 20 seats in the parliament.

The Self-Determination movement of Albin Kurti, the third strongest party, did not join the alliance but backed signing of the deal.

"From now on it is impossible that opposition parties will join Thaci and allow him his third mandate," Kurti said.

He said that his party's backing of the alliance would depend on its program.

Once the new parliament is inaugurated, the Kosovo president is to give the mandate to form a government to the leader of the party that won most of the votes. However, it can also name another prime minister-designate.

Thaci, an ex-guerilla chief, has dominated Kosovo politics since it declared independence from Serbia in 2008.

Thaci has presided over a disaster in Kosovo. Unemployment and corruption are rife. Time for change, not more of the same. Thaci has proven he is not up to the job. It is Haradinaj's chance to show strong leadership as he always has in every phase of his life no matter what the challenge has been.
Ramush has a job to do.