Assad Describes Aoun as 'Honest,' Backs his Election as President 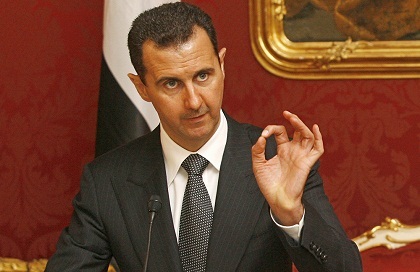 Syrian President Bashar Assad has described Free Patriotic Movement leader Michel Aoun as an “honest man,” saying he would welcome his election as a president.

In an interview with al-Akhbar daily published on Wednesday, Assad said: “Aoun is an honorable and honest man who fought with dignity and reconciled with dignity.”

Aoun “remained loyal to his stance towards us despite all the storms,” he said.

The Syrian president stressed that his country does not interfere in the local affairs of any Arab state.

“But we welcome Aoun's election as a president for being in Lebanon's interest and in the interest of friendly ties,” he said.

The FPM chief is “patriotic, non confessional and believes in the resistance,” Assad added.

Lebanon has been without a president since May 25 when Michel Suleiman left Baabda Palace over the failure of MPs to agree on a successor.

Assad is due to be sworn in for a new term on July 17. He was allegedly reelected last week as voting took place only in regime-held territory, amid a raging conflict that has killed more than 162,000 people in three years, and excluded any anti-regime opponents from standing.

Syria's opposition is backed by much of the international community, while Assad's government is supported by Hizbullah and its backer Iran, as well as Russia.

The party has sent its fighters to Syria to battle alongside Assad's regime.

Hizbullah leader Sayyed Hassan Nasrallah has only “shown compassion, which neither Syria nor Syrians would forget,” Assad said.

He added that he agreed with Nasrallah on “what he sees in Lebanon.”

You just killed any chance he had, but ye butchers think alike

I am sold. Where do I cast my vote?

oh i see, you guys were for aoun earlier, but now that assad said he was patriotic and non confessional, you just changed your minds? lol.

sure aoun is a true syrian patriot lol

Aoun “remained loyal to his stance towards us despite all the storms,”

I call that treason and collaborationism! Aoun is and will remain the biggest traitor in Modern History of Lebanon!

One of the worst mass murderer the world has ever known is calling aoun honest.

treason? collaborationism? lol big words for the small man you are, syria is lebanon's ally, despite what your saudi masters told you.

don't worry guys ... those weak M8 sissies believe that the more syria harms Lebanon the more syria loves Lebanon! they are just petty collaborators and proud of it! and they thank them for getting fu...ed!

@momo... I have no Master... not Saudi, not Israeli, and certainly not Syrian. It is you, and the likes of you who have those kind of issues. And those are Big Words for a little man indeed...
A man who attacked his Lebanese fellows, sent his soldiers to the slaughter house, denied the existence of POWS, allied with the ones he faught before, caused the biggest destruction of Lebanon, thanked and apologized to Assad, obstructed the parliament, blocked the elections, etc, etc, etc..

Cheer for Assad and Syria all you want FT... we only cheer for Lebanon!

is it not u ft that was cheering assad's success towards resistance, secularism, women and minorities rights ? Didnt u tell us that Hafez built modern syria ?

Syria under Assads are better than you wahabis taking over cedre. Good thing we spoiled your chances.

Gabby
Aoun was finished long ago when he opened his big mouth...

'honest' coming from a dictator is very valuable

what are you talking about "3ouroubi" what do u know about that ,how about the million of Children that you have killed, even Isreal didn't do that for arab , do u talk about "3ourobi" what a stupid talk...second the one who has an empty head and criminal like you doesn't have the right to take decision of what president we will have .

is there clearer than this?

aoun is the Syro/iranian agent and nothing else.

Bashar, shove it. You're not even a recognized president. You have nothing to say about Lebanese elections.

In fact, you naming Aoun makes him an even less likely candidate now !

You have no credibility and absolutely no respect other than that of the sheep and the couple of Aounies who forgot you beat the shit out of them !

Coming from Assad say no more .

The FPM chief is “patriotic, non confessional and believes in the resistance,” Assad added.

Translation: The FPM chief is "patriotic like Petain and myself, non confessional because he hates everyone that does not worship him and believes in the resistance and boycott of presidential elections until he is "chosen""

you know what bashar, why don't you keep the syrian model of democracy in syria, and let us choose for ourselves... 162k dead and counting in your country, we don't need your opinion on who should be president in lebanon...

Aoun has other supporters too:
Khamanei: "If he is elected I shall dance to Hava Nagila"
Ahmadinejad: "Oustaz Aoun is mumtaz."
Kim Jong-un: "Ah! Aouni is mini-me. He learns from the masta"
Ayman al-Zawahiri: "Hate his guts but he reminds of Osama's illuminated mind".
Serial killer Charles Manson: "He's my kind of nuts."

Darth Vader: "Aoun is my son. He understands the power of the Dark Side"

Freddy Krueger: "I’m your boyfriend now, Aoun".
The Jocker: "Lebanon deserves a better class of criminal. And Aoun's gonna give it to you."
Dr. Hannibal Lecter: "Aoun, eat their livers!"

Gebran got angry because everyone seems to love his father in law:

Dr. Aoun:Gebgeb, that hurts daddy when you say that. Honestly.

This just in: Lord Voldermort backs Aoun for President: "Aoun understands that there is no good and evil. There is only power, and those too weak to seek it."

and back to the good old days that aoun pretended to fight at the time and now he is backed by the one he vowed to erase! LOL how ironic!

If you like him... take him as prime minister

Oh and give him Syrian citizenship please... looks like he likes it more than the Lebanese one!

Lol what an endorsement to have on his cv. Its like being endorsed by osama binladen when applying for US Citizenship. This circus gets funnier everyday.

right on. can't agree more. death to all traitors. long live the Lebanese Froces, the only true resistance

Sure and hezballah will immediately abide by a LAF imposed martial law under the complete control of the maronite army comander. I'll have what you're having.

Assad knows that by endorsing aoun he's sinking any hope even the faintest aoun had to become president.

Good Lord Bachar, if your friend Aoun is an honest and patriotic man, then surely the Vatican must at all cost now consider making you its next Saint. You also said that you do not interfere in other Arab countries' affairs, then you tell me what this statement about your support to Aoun who in turn supports Hezbollah is all about? I firmly believe that starting from you, to Hezbollah and to your lackey Aoun, that you are all not properly anchored on the soil. If I were you, I would start touching real ground, because a lackey is never trustworthy, never. And so are you Mr. Bachar, soon to be Saint Bachar. machalah.

it is a full stop,point a la ligne . poor aoun.

like it or not these days the big fish eats the small ones, the stronger on the ground is the one who takes over i just said it like it or not;)

Now there's a ringing endorsement of Michel Aoun from a guy who has been indicted for war crimes by the ICC. Honest, yes, Aoun is honest when he says he is against Syrian hegemony in Lebanon he really means it if the one to whom he is talking is against Syrian hegemony in Lebanon and promises to make Aoun President of Lebanon.
When Assad promises to make Aoun President, then Aoun says that Assad should win the Nobel Peace Prize.
Honest?? Aoun??? Consider the source.

Waaaahahahahahaha hahaha the General of Generals lol his capitulation and desertion was so quick the French army asked him to teach that strategy to them, they wanted to be more efficient.

Respect to Geagea for standing his ground and staying. Spent 11 years underground.

A liar supporting a liar

A traitor supporting a traitor

Last but not least: a crazy man supporting a stupid man

Yeah and just forget all the killings they did from thinker, politicians to regular Innocent people. May assad the mouse rot in hell with that so called general pussy aoun

Assad has named Aoun by name when is Nasrallah going to do that?

If you tell me who your friends are I'll tell you who you are.

Indeed, Aoun is truly an honest man. Honest in eyes of Iran, Syria and HA. A nightmare for the rest of us Free patriotic Lebanese, who only desire to live in peace.