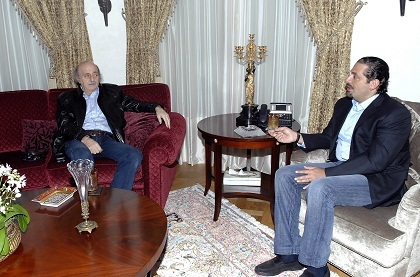 A meeting is expected to be held next week between Progressive Socialist Party leader Walid Jumblat and the head of al-Mustaqbal movement, Saad Hariri.

According to al-Akhbar and al-Liwaa newspapers published on Thursday, the meeting will be held on Tuesday in the French capital Paris.

On Wednesday, Jumblat revealed in an interview on Tele Liban that he was supposed to hold talks with Hariri last week but circumstances compelled the postponement of the meeting.

“There's no tension between us,” the Druze leader stressed.

However, al-Mustaqbal MP Mohammed al-Hajjar said in comments to Voice of Lebanon radio (100.5) that he has no information on the timing of the meeting between the two leaders.

Al-Akhbar said that Hariri, who is currently in Morocco, will leave to Paris on Sunday.

The reception was held to honor Moroccan King Mohammed VI.

u prefer NasrCaptagon, the iranian poodle ?