In Lebanon, World Cup Fever a Break from Politics 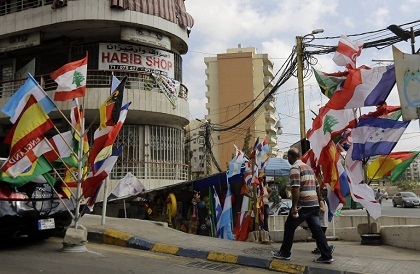 Lebanon's capital Beirut is awash with flags. But instead of the usual political colors, they're the bunting of World Cup competitors like Brazil and Germany being flown by local mega-fans.

Lebanon's national team didn't qualify for the event starting Thursday, and the tiny nation has no great sporting track record.

But its citizens display a near-fanatical enthusiasm for chosen proxy nations, mainly countries that tend to do well in the World Cup and host large Lebanese populations, draping cars, homes and businesses with "their" country's colours.

"I just love Germany. I love the way they play the game," says 19-year-old Elias Nohra.

He spent $50 having a Germany flag sticker affixed to the roof of his car.

"Money well-spent," he says with a grin.

Some drivers have gone further, trailing fluttering flags from their cars, draping scarves round their rear-view mirrors, and even plastering semi-transparent flag stickers across entire windshields.

The mania is a chance for the often unstable country to escape the daily grind, and good news for vendors, with even those who usually sell cellphones or children's toys adding flags to their stock to cash in.

"Every day we get closer to the World Cup, flag sales increase," says 23-year-old vendor Ali Nasrallah in the Sabra Palestinian camp in Beirut.

"The flags we sell most are Brazil, Germany and Italy."

A survey of the landscape makes it clear that Brazil, Germany and Italy are indeed local favorites, with the three nations best represented among the flags flying from cars and homes.

That comes as no surprise to 23-year-old Rayan Musallem, a sports journalists and Brazil fanatic.

She belongs to an official fan club working with Brazil's embassy to organize match viewings.

"I've loved Brazil since I was little, it might be because my family nicknamed me Rio, but to be honest I just love the country, their passion for football and the way they play," she says.

Like many Lebanese, she knows families who have emigrated to Brazil, which is home to the largest concentration of Lebanese in the diaspora.

Such ties through emigration are one reason Lebanese cite in choosing which country to support.

"I'm with France because all my family is there," says 50-year-old Aida Qassis, who owns a toy shop but has added flags to her stock.

"You know, Lebanon took its independence from France and France still supports us, so I hope they do well in the World Cup," she says.

Elie Sarkis inherited his support of Brazil from his father and grandfather.

"They've always loved Brazil, I think in part because they were impressed that when players scored they'd cross themselves and thank God," he says.

"My family are very religious, and they like that in Brazil, people might be poor, but they have faith, and when they get rich they still love their country and have faith in God."

But for many Lebanese, the decision to pick a team is swayed solely by their favorite players.

Argentina has seen its popularity here boosted by the high-profile career of Lionel Messi, and Portugal commands an outsize following on the basis of its star striker Cristiano Ronaldo.

For 24-year-old Tony Rizk, it was legendary goalkeeper Oliver Kahn who started his passion for Germany's team.

Last year, he fulfilled a life-long dream by visiting Munich, and this year he and the fan club he founded are working with Germany's embassy in Lebanon to organize viewing events.

Like many Lebanese, he describes World Cup mania as one of the few non-political events in a country often marked by political and sectarian divisions.

"Our club has fans from everywhere in Lebanon. You see Muslims, Christians, everyone, watching the games," he says.

"It's a unifying event."

You know parraeels, I would love Australia or Brazil to win in the Soccer World Cup. And if neither make it > ITS all GOOD just as long as Rabbitohs South Sydney continue to stay above Parramatta Eels. HEEEEE lmao

I remember during the war fighting magically stopped during the world cup as soon as games with teams like Brazil, Germany (West), Italy started we used to go around try to find someone with electricity or a generator to watch the games there crazy times