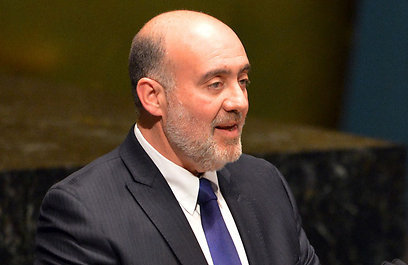 Israel’s Ambassador to the U.N. Ron Prosor has accused Hizbullah and Iran of launching a campaign of terror against the Jewish State, urging the international community to find an “antidote” to eradicate the virus of terrorism.

“Israelis are the targets of a terror campaign directed by the Iranian Revolutionary Guards and Hizbullah,” Prosor told the 94th plenary meeting of the U.N. General Assembly on Thursday.

“Iran’s fingerprints can be seen on attacks from Bulgaria to Kenya to Thailand, where just a few weeks ago, authorities foiled a plan by Hizbullah agents to attack Israeli tourists,” The Jerusalem Post quoted him as saying.

“When our children are not safe in their schools and our families are not safe in malls and museums then we – as an international community – have failed,” he said. “We have failed to stand up to terrorism and failed to fight back the plague that threatens to overrun entire nations.”

“We must isolate terrorist groups by cutting off their funding and dismantling their networks.”

According to the Jerusalem Post, the diplomat also told the General Assembly that the international community should produce an “antidote to eradicate the virus of terrorism before it eradicates us.”

But Prosor stressed that Israel became a specialist in the field of counter-terrorism out of the persistent need to defend its citizens against terrorist organizations that have continuously threatened the Jewish state since its rebirth 66 years ago.

Avi was on Naharnet shift last week, its Moshe this week

You read the story of someone who cried wolf too many times?? No one cares Mr. Ambassador.

I'm no hizbollah fan but this dude is a joke.

Tell this guy to go eat a banana

for those hezbi lovers : notice that he is against hezbollah, not Lebanon! LOL

Shove it RON and let the Lebanese people deal with Hezbollah !

The only ANTIDOTE is EDUCATION and reverse brainwashing. No other solution !

Hezbollah is our problem, our nightmare, our stupidity, our people. If Israel needs security than I suggest they give the Palestinians a just peace.
Israel has to go cry wolf and get help from the US, their puppet and sponsor. The best thing the US can do to Israel is to impose sanctions on it and freeze the bank accounts of Netanyahu and co.

Your pleas will fall on deaf ears, after the Iraq disaster. The int. community might beg hizbullah now to go and clean Iraq from that filth.

then go at war with half Lebanon ya chater! LOL

lol... poor arrogant creature... sure, you must be proud to fire on lebanese while your party always said he would never do such a thing, big fat liars you are....
and you pretend to be lebanese? you are rather an apologist of the islamist revolution... no better than your ally ISIL....

distort truth as much as you want but the facts prove you wrong little irrelevant creature....

and what are you?

and you represent iran as you speak the same language.

The language of Nasrallah and idiots are the exact same !

sure because it is the same as nasrallah thinks for them and they just repeat as it is all their brain can do....

learn how to read first: it might benefit you :)

Dream on, if you think Israel and HA are allies.
I can assure you if HA is an ally of Israel, I for one wouldn't want to be an en emy of it.

Can I just sayy what a relief to find an individual who truly knows what they're talking abbout ovfer the internet.
Yoou definitely realpize how to bring a problem to light and make it important.
More and more people should read his and understand this side of your story.
I was surprised you are not more popular since you definitely possess the gift.