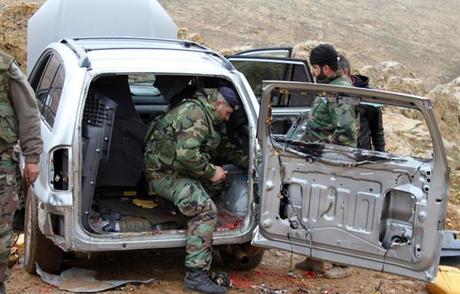 The situation along the Lebanese-Syrian border, especially near the outskirts of the Bekaa town of Arsal, has taken a dangerous turn in light of the Syrian regime's waging of an attack on the area of Rankous and the militant al-Nusra Front's imposing of Islamic courts.

A reliable source told Egypt's Middle East News Agency that the security situation in Arsal has become dangerous as “armed groups have gone so far as to set up these courts and carry out the death penalty against convicts.”

He estimated that there are about 3,000 armed gunmen present in the outskirts of Arsal, the majority of whom are Syrian, including members of the Nusra Front.

These members fled to this area from the now Syrian army-controlled region of al-Qalamoun.

The estimates are based on the number of loaves of bread being distributed by the town of Arsal, explained the source.

In addition, these gunmen possess light and medium weapons, as well as anti-aircraft guns.

They also take advantage of the terrain in Arsal that is scattered with valleys and caves that facilitate the guerrilla warfare.

Arsal shares about 40 kilometers with Syria.

Moreover, the source told MENA that the gunmen obtain “through illegal means some of the humanitarian aid dedicated to the displaced Syrians.”

Armed Syrian gunmen recently surrounded an Arsal municipality building after the eruption of a dispute over the distribution of aid.

Municipal chief Ali al-Hujairi had turned to the army to settle the dispute.

Furthermore, the source highlighted the threat of the jihadist group Islamic State of Iraq and the Levant and the advances it is making in Iraq, warning that the militant threat may approach Lebanon's borders whereby members of the Nusra Front may decide to join the ranks of ISIL.

“This has been known to happen in several Syrian regions despite ISIL's notoriety, even among extremist groups,” he added.

Commenting on the gunmen in Arsal, he spoke of the so-called Islamic Front, which is a union of a number of jihadist groups in Syria.

The most prominent group however is that of the “Green Brigade” that is affiliated with al-Nusra Front, he revealed.

The gunmen in Arsal recently waged an attack from the region against targets within Syria.

This development coincides with reports published in the Lebanese As Safir newspaper on Friday that spoke of an attack carried out by gunmen against the Syrian town of Rankous.

The source called for an “Arab and international stand against the pockets of gunmen along the border with Lebanon that coincides with the spread of the ISIL in Iraq.”

“These developments are a danger to the entire region, not just Iraq and the Levant ,” he warned.

The army carried out on Friday a wide-scale raid in the outskirts of Arsal in search of gunmen and wanted suspects linked to terrorist activities.

It arrested Syrians Zaher Abdul Aziz al-Ahmed for his connection to the al-Qaida-linked Abdullah Azzam Brigades.

It also detained Nour Muheiddine Shameseddine, Haitham Nader Ghannoum, Adel Suleiman Ghannoum and Mohammed Nazih Ghannoum for the possession of cameras, computers and CDs that show their participation in training with terrorist groups.

no blaming, nobody believes this BS...

can u prove 'islamic law' established in arsal or its outskirts?

Assad is largely to blame. His supporter slogans at the beginning of the revolt in Syria "Assad or Let Syria Burn." His inability to allow his people freedom and his torture and killing of peaceful protestors opened the gates of hell. So yes, it is largely his fault and those who supported him all the way.

haboub believes naharnet without proof when it suits him...

NasrIran and wiam wahabi start all their lies by these words...

LOL! Hats off Ultra you called it. As for the Nostradamus of the M14 camp Cedre I must say I do miss your insight into the future blzzzzz tells us all again when Bashar/Iran/HA will bite za dust again?? Have a nice day my Wahhabi head chopping fan :)

Has nothing to do with reality