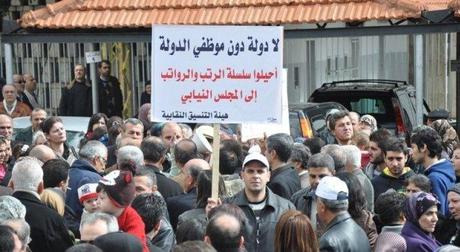 A project to grant military officials, public sector employees, and teachers a temporary cash advance as one proposal to resolve the dispute over the new wage scale is being studied, reported al-Joumhouria newspaper on Saturday.

Informed sources told the daily that the advance will be part of a 20 to 25 percent raise for these employees.

This salary hike will be included in the proposed modifications of the wage scale draft-law.

The modifications also include refraining from altering the time scheduled of public sector and public school employees until a new president is elected.

This will pave the way for an “advanced level of security in Lebanon that will allow for serious discussions over the funding of the new wage scale that is being proposed today,” explained the sources.

Several political and economic officials have warned that approving the draft-law will have a negative impact of Lebanon's economy.