Saniora: Urges Govt. to Assume its Duties, Avoid Endless Debates over its Methodology 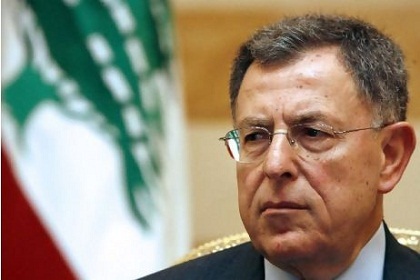 Head of the Mustaqbal bloc MP Fouad Saniora demanded on Saturday that the government kick off its duties through adhering to the constitution.

He said during the launch of a workshop in the northern city of Tripoli: “The government must go ahead with its responsibilities and avoid becoming embroiled in endless debates about its functions.”

The cabinet failed on Thursday to reach an agreement over the methodology it should adopt in conducting its affairs, raising fears of the emergence of paralysis in the government given the vacuum in the presidency.

“The government's primary goals should be paving the way for the election of a president,” continued Saniora.

“The vacuum in the presidency is unacceptable and we must end this flawed situation,” he stressed.

“Until a new president is elected, the government should concern itself with catering to the people's needs instead of wasting time in endless debates over its methodology,”noted the former premier.

In light of the ongoing vacuum, Saniora said, the parliament should remain “calm and productive”.

“The Mustaqbal bloc does not seek to obstruct parliament's work,” he remarked in reference to its lawmakers' boycott of a legislative session aimed at discussing a new wage scale draft-law.

President Michel Suleiman's term ended on May 25, while the next elections session is scheduled for June 18.

The March 14 alliance has remained committed to the nomination of Lebanese Forces leader Samir Geagea, while the March 8 camp has yet to name its candidate.

Commenting on the new wage scale draft-law, Saniora said: “The bloc is willing to engage in serious dialogue over the hike.”

“It is not however prepared to adopt a law that will jeopardize Lebanon's economy and burden it with repercussions it cannot handle,” he warned.

Several political and economic officials have warned that approving the draft-law will have a negative impact of Lebanon's economy.

The Mustaqbal Movement, along with a number of Christian lawmakers, are boycotting legislative sessions aimed at discussing a wage scale for the public sector to protest the failure to elect a president.

Addressing regional crises in Syria and Iraq, Saniora stressed the need to fortify Lebanon against external dangers, demanding that Hizbullah withdraw its fighters from Syria.

“The party must immediately withdraw from the neighboring country and avoid drowning further in regional conflicts,” he added.

“Protecting Lebanon is still possible, but it cannot be achieved without the unity of all of political powers that seek the people's interests,” he stated.

To that end, he called for the election of a new president, demanding that the March 8 alliance name its candidate.

“It should announce its candidate or agree on a consensual nominee who would have the ability to launch dialogue in Lebanon and unite the people,” Saniora explained.

“A consensual presidential candidate should have a sound national vision for the country,” said the Mustaqbal bloc chief.

coz like usual, u can prove all this...
Why am i not amazed u never talked about berri's billions ?
Is it coz ur sectarian and shia ?